Just wanted to ask to get some design feedback on the system. I have a set of custom properties on a view, but they are null until an operator selects a row in the table. In the browser, they seem to work fine, but in the designer, it shows an error for each one.

Is this an ok practice? Should I put a transform in to convert the null values? The properties won’t be pulled for anything unless a row is selected, so I don’t think I’ll have issues with processing those values within my scripts. Just don’t want to break or hurt anything elsewhere. 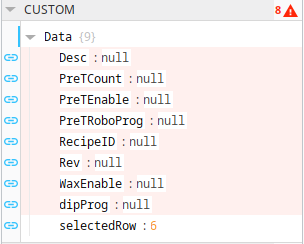 The warning is actually a result of the bindings you have in place, not the null values.
As for whether or not it’s an acceptable practice… Yes and no, but generally no.

They are bound to selectedRow properties in a table component. So they are really only null if no row has been selected yet they don’t have a value

I figure passing a one custom object bound to the points I need is easier than many individual bindings. (at least once that is fixed).

Then there’s a better way to perform this.

Instead of having one object with nine bindings, just bind against Table.props.selection.data wherever you would use that data, and extract the data you need from the returned object.

In your use case, you are duplicating an object which already exists, and binding (I’m assuming columns) to object keys, when you could just bind to the original object and grab what you need piece-meal.

Wrapping the bindings with a transform which returns null if nothing is found will work, but it will also mask failing bindings, as that failure will be transformed to null. Binding against Table.props.selection.data and using a script or expression Transform to obtain the necessary data would give you the option to handle the empty array without having to implement a

For a Table column defined as “ColumnA”, the following Script transform on a binding of ../Table.props.selection.data got me the selected row’s value in the "ColumnA’ column:

Using this method will display no warnings in the Designer, and if a specific binding does fail, you’ll notice it at the individual component level, as opposed to some obscure property hidden within a component, but which affects MANY components.

You can also add a coalesce to the expression.