I am looking for a tutor for module development

I took a break from the GUI to work on the actual date calculating logic. I started this in a separate IntelliJ Project because I didn’t know how else to test it without re-building it and then reimporting it to Ignition every time.

I shortly realized I would really like to leverage the prebuilt system.date.* functions instead of manually doing date arithmetic (is there anything more disgusting?).

Is there a way to do that where I could run? Right now the code I’m testing looks like

I realized quickly its becoming mess of different date time libraries right now and I am not using timzones on everything which I think the system.date does do (correct me if I am wrong) - a large part of why I would like to use them. Also a big advantage would be to use the simpler system.date.add* and system.date.get* functions would help me do the more complicated calculations much more easily. What would be the easiest/ most appropriate way to be able to use those functions in my testing of this DateCalculator? FWIW the original project I made from the vision-component-archetype so I don’t know if that means the scripting functions are there or not so I don’t know if bringing this over to that would work automatically.

Most (all?) of system.date's functionality is in static functions in com.inductiveautomation.ignition.common.script.builtin.DateUtilities, which, being in common, should be available to you in any scope.

The underlying functionality is driven by either Calendar or, for the math, an imported joda-time dependency.
For consistency with our code, it’s probably reasonable to use our libs.
In your maven or gradle setup, with common marked as a dependency appropriately, you should be able to run our code in your own project without launching a whole gateway (in this case). Considering looking into a unit testing framework such as JUnit.

As an aside - our use of Date is mostly historical baggage at this point. In a perfect world we’d have migrated away from it once we had the chance. The gold standard for date/time operations is the java.time package, e.g LocalDateTime; the problem is Date is a “lossy” conversion from any of these objects so you usually have to jump through some hoops to get from them to a Date.

Over the weekend I tried reading up more on the build tools and after a while I quickly came around to thinking Gradle was much easier to manage and handle. I just have three probably simple questions as I want to refactor what I currently have within a Gradle structured project. The example I learned from gave me a setup like this - 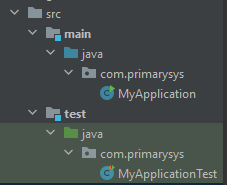 Question 1:
I know in the maven setup I have a build/client/designer folder. Are all three still necessary, and how do they fit in here? Would they all go under my main?

Question 2:
Related to one - in my simple app I have

to build my class. What would in my manifest to properly build the componeont?

When I am trying to add the factorypmi to get the datetime selector component for instance, I do a Alt+Insert in my dependency, do a Maven Artificat Search, and get the following - 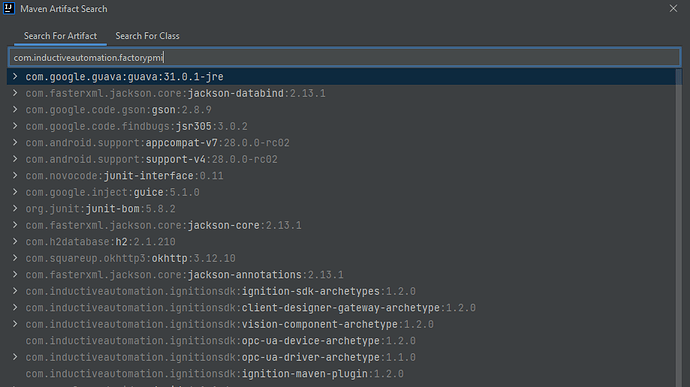 What is the “right” way to find the Ignition packages I need and add them as a dependency? Thanks for all the continued support on this.

I know in the maven setup I have a build/client/designer folder. Are all three still necessary, and how do they fit in here? Would they all go under my main?

Just like Maven, you would need three (as Gradle calls them, not sure on Maven) subprojects, because you’re still ultimately producing three different artifacts. The structure is broadly the same - a folder at the root level, with a separate build.gradle inside it that tells Gradle how to build this project (just like an inner pom.xml).

What would in my manifest to properly build the componeont?

Ignition doesn’t care about the manifest (at some point, maybe it might be nice to change this, so you don’t have to separately specify the hook class in the module info, but it’s not a big gain, really).

My repository is mavenCentral()

This is another one of those somewhat confusing things - you’re using Gradle, but downloading artifacts from our server that implements the Maven dependency resolution spec.

Once you have those repositories selected, you would add the appropriate dependencies to your individual subprojects, and they should resolve (and be auto-completeable) in your actual source files.

Coming back after a while off of this.

Right now I am struggling to make a basic dataset.

Upon checking out the documentation It seems like I am supposed to feed a 2d list of objects as the third argument. Is there some object that I should be using? I tried making something like this

But this actually takes care of both columns, but that isn’t quite right.

? indicating I don’t know what this classes constructor should look like but trying to convey my data.

Is there a more appropriate instance of Dataset other than BasicDataset I should be using for this case, like an ArrayDataset?

I recommend using the DatasetBuilder tool. It yields a BasicDataset, but constructed row-wise.

Worked on this a bit this weekend.

I have the right framework set out now so I just have to find some time do write up the date calculating functions.

I am noticing two issues I want to try to resolve before proceeding.

What line issues the NPE?

Consider initializing currentDate outside the constructor.

I wouldn’t bother with container. I’d just add its contents to this.

Got rid of the container and just added to this and the functionality remains the same and simplified the code a bit so that is good.

Just saw I had currentDate inside my constructor but never even use it so I have commented that out - I do all date calculations when the dropdown changes.

Here is the newly updated code

And here is the NPE stack from the designer console - I can’t figure out line number it is referring to.

That NPE is coming from a table. I don’t see any table in your component, so I think that is something unrelated.

Do you have a beaninfo for your component? What’s it look like?

I think you’ve exposed a raw enum on your component and the property editor isn’t happy with that. For serialization/deserialization (and probably other) reasons, Vision doesn’t really expose true enums - instead, a simple integer property is exposed, but masked as an enum by the editing UI.
E.G PMIComboBox’s ‘mode’ property is called an enum in the bean info but there’s no actual enum associated with it:

I think there’s something funky along these lines going on with your component.

Ah ok I thought that was a separate issue and would be what I wanted to tackle next. When I import my component the properties look like 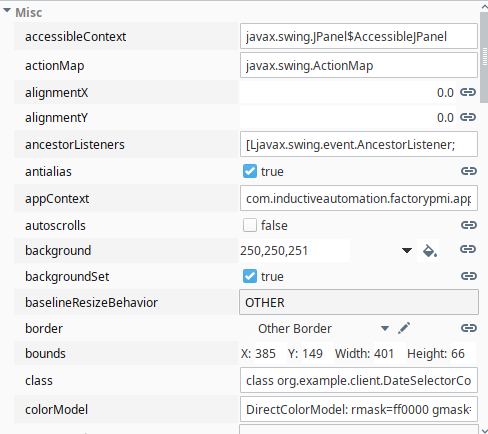 Think this may have come straight from the archetype - I don’t recall changing anything here.

All I really want to expose are 3 things - what is the current selection from my dropdown (“All”, “Today”, etc), and what the the current date the PMIDateTimePopupSelector’s are set to (startDate component and endDate component).

I don’t know if I might need two separate public properties that would keep track of the dates selected by the components, or if there’s a way to just let certain parts of those components come through through to my components beans info.

I am not really knowledgeable about beans so this part really confuses me.

Is your beaninfo actually being used?

So I guess not based on your highlighted line

Womp womp. Yeah, I would recommend fixing the package path. That should dramatically change how the property editor looks.

Hmm, I am still having an issue

I noticed your designer hook file also had a public static final String MODULE_ID = "component-example" that mine was missing.

for reference in case it’s something here, here is the bean info file

I noticed your designer hook file also had a public static final String MODULE_ID = "component-example" that mine was missing.

That shouldn’t matter, it’s just a useful constant to have, not a requirement for anything.

So you’re currently, in designerhook.startup, adding org.example.designer.beaninfos to the ‘bean info search path’?

Any chance you can put this code up in a public way, e.g. a Github repo? 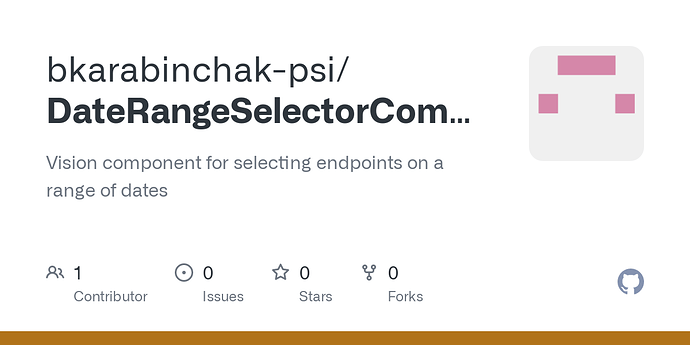