newDs = sytem.dataset.buildDS(['colName1','colName2',..],[int,str,...]) where the python typing of int maps to java.lang.Integer, str to java.lang.String etc

I suppose you could call builder(), and then I could add setters for column names and column types to the builder object; that way you can get the terser syntax if you don't need exotic column names, but it's available if you do.

Meh. DatasetBuilder gives you total control in a very terse package. Maybe just expose it in system. so we don't have to import it. (With the java class names suited to datasets for use with its colTypes method.) Its methods are chainable so one-liners are easy.

With the java class names suited to datasets for use with its colTypes method.

Those, or the abbreviations used in CSV files. Or both. But limited to the classes in the dataset tag whitelist.

Or maybe re-implement .colTypes to also accept strings of the simple class names or the abbreviations. 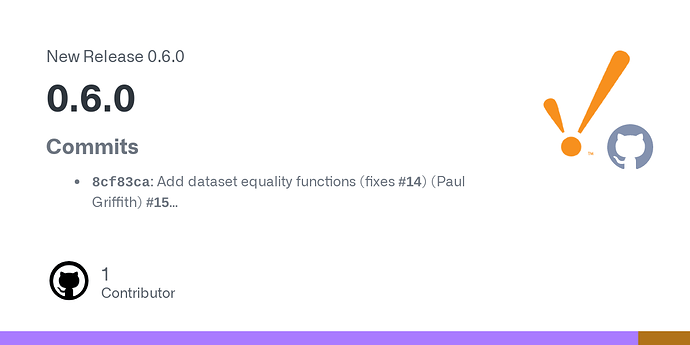 Great stuff @PGriffith . The string for column types is better than my original suggestion and more consistent with what Ignition already uses.

So, the only way you'd have equals return false but valuesEqual return true is if the second dataset had the same column types, rows, data, but different column names. I figure that's unlikely, but potentially useful.

I'm sure I had an idea somewhere, but my suggestion was to add an argument into the system.tag.getConfiguration function to return only the config stored on the tags themselves, not from parent settings such as non-defaults configured in the UDT definition.

This was the idea I was talking about. Is it possible to add this change into the extensions module? Or at least another function to return just the non-default config on the UDT instance and not in the definition? This is a big issue when trying to script tag changes

I could probably add something like system.tag.getLocalConfiguration? Assuming I'm understanding what you're asking for properly.

Basically need a function to get the json exactly as the 'copy json' in the tag browser returns it. Local config sounds about right! That'd be great to have 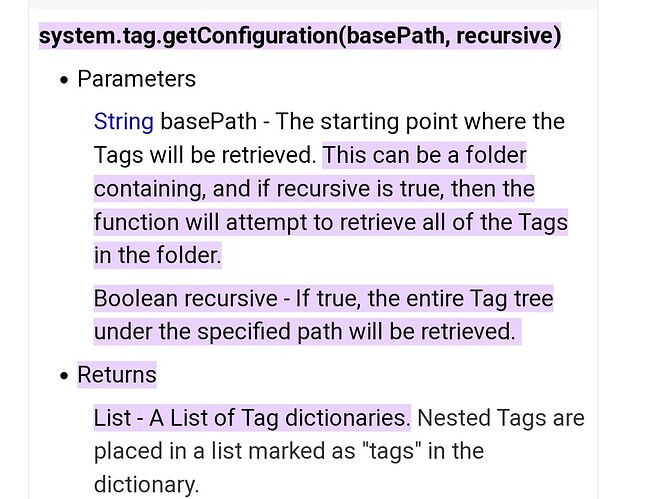 Most likely, it's a verbatim transcription of what a developer sent when initially explaining the feature when 8.0.X launched that no one's ever amended.

Recently I had to convert something to an iso format. Currnetly you would have to do it manually system.date.format but other date libraries (like datetime for instance) have a function .isoformat() since ISO is so common. So maybe that as an additional date function? Something like system.date.isoFormat(someDate)?

I know it's simple and only saves a handful of lines of code but we are talking about convenience functions. Just a thought. I don't know how others feel about this one.

Sorry for the sin of double posting but I ran into a dataset one that I would love to have.

I am trying to write tests now and I have to refer to datasets that come in and get referred in my functions. In my test function I don't want to have to have to go out to the window and grab a dataset. This I guess falls under meta programming but it would be nice if we could reverse engineer any dataset into a script that creates the dataset? For example say I have a dataset

so that I could then copy and paste this in to my unit test scripts.

Perhaps this is too easy to do in jython already though so maybe it's not worth it. Just throwing it out there in case others also think it would be useful.

To be reliable, it would need to use DatasetBuilder. With that, python's repr() is your friend. I don't think you need java for this.

Recently I had to convert something to an iso format

This is the only datetime format I use, since it's the most logical (sorry you US folk

) and importantly, it's also inherently sortable

Just want to give back to the community a little bit since you all have helped me so much. I know it's something I specifically asked for but maybe it will help someone else too - a way to take a dataset and convert it to code that would generate an identical dataset. I am using this so I can take datasets that are in windows and convert it to code for my testing functions easily (I have a lot of datasets to do it for)

It works pretty well for me and the types seem to come through as well at least on my initial tests which is nice. I'm sure there is room for improvement but this works well enough for me atm.