My colleagues and I try to follow a pretty normal git development flow: we implement things on temporary branches and do peer-reviewed pull requests to merge those into a main “develop” branch. And after some period of testing and vetting, the “develop” branch is then pulled into a “production” branch.

We still have to be cautious and avoid more than one of us working on the same binary file at the same time, but we’ve been able to work on the same view or script and git was able to merge changes reasonably well.

The resource.json files are driving me nuts, though.

They always conflict, every time we touch anything in a directory, even if the changes in the code.py or view.json or whatever were merged gracefully by git.

I know we could just jump them to a clean-but-mismatched version by using something like git checkout --ours. But then we will have a commit in our history that if checked out will trigger a gateway to regenerate the resource.json and leave uncommitted files sitting around, which makes subsequent git operations propblematic. So the proper thing to do is to let Ignition re-generate them after resolving the conflict and roll that into the commit.

But I usually have Ignition stopped so it doesn’t freak out on conflict markers in files, which means my merge/rebase process now involves starting and stopping Ignition gateway after every conflict just to re-scan files and re-generate resource.json files.

Does anyone else have a better method of dealing with this? I know the IA team has a plan to let users control when Ignition re-scans the projects directories, which would at least let me keep Ignition running, but that feature isn’t here yet.

The issue is that resource.json is composed of both user-supplied metadata and calculated metadata. The former belongs in git, the latter does not. This will not be resolved until IA redesigns how this file works.

If a CLI tool existed I would use it. But I also agree that the files should be revamped in the long run to avoid the issue entirely.

Well, it’s not currently very useful, but in case it helps anyone as a starting point, I made a thing: 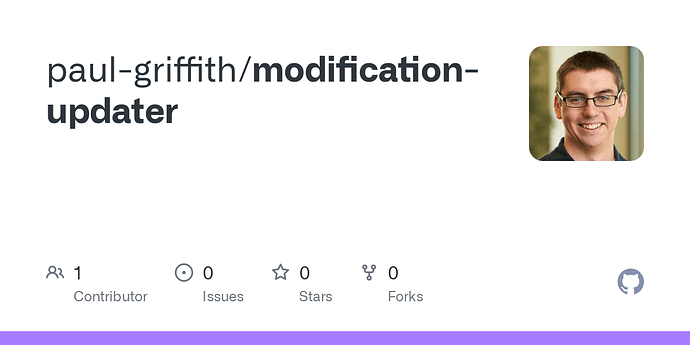 Contribute to paul-griffith/modification-updater development by creating an account on GitHub.

Download the latest built jar from here: Update readme · paul-griffith/modification-updater@137aaac · GitHub
Run it with any Java 17 build on the command line:

You could, in theory, hook this in to Git in some way to automatically update the resource.json files before overwriting them in the resource directory, and, since the signature will be valid, Ignition won’t overwrite them again later.

I’ll give it a try. If it saves me from cycling Ignition on/off repeatedly, I’m happy.

Of course, almost immediately I did this:

Works fine as java -jar modification-updater.jar . > r0 && mv r0 resource.json though, so no biggie. Just made me chuckle that the most obvious usage pattern blows away the input file before it can read it.

The gateway is fine with the resource.json files that tool makes, but Designer is more finicky about the date format.

But it was definitely faster using that tool to adjust the hashes than starting/stopping the gateway!

Looks like the Designer parser just doesn’t like the absurd precision the tool added on the seconds. I’m trying to figure out the syntax to wrangle the DateFormatter line in your code. First time ever using Kotlin! Let’s see if I can wing it.

Well, I’m a lot less confident in this than the Kotlin version, but I wanted a learning project, so last week I ~recreated the CLI above in Rust: 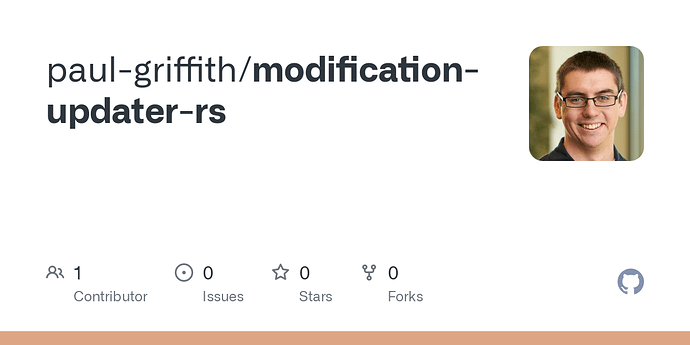 Contribute to paul-griffith/modification-updater-rs development by creating an account on GitHub.

I don’t know if it’ll work across all possible resources, but it’s guaranteed to be a lot faster:

The Rust one has some issues:

But I’m learning Rust, so I’m more prepared to fix coding issues in this one.

Don’t prioritize fixing this tool unless you’re having fun.

Don’t prioritize fixing this tool unless you’re having fun.

Disclaimer: it can be difficult to beat Paul G. to a Pull Request

Thank you for that tool, it could be very handy to implement a workaround to handle resource files for the moment!

Especially the rust tool which is really performant. However I found a small bug there: The timestamp is not the current timestamp as stated in the readme, but is always “2022-05-27T16:47:43Z”.

Especially the rust tool which is really performant. However I found a small bug there: The timestamp is not the current timestamp as stated in the readme, but is always “2022-05-27T16:47:43Z”.

Yeah, @justin.brzozoski noticed that too. If you update the repository it should be correctly using the current local time.

The rust version has been updated with some edge cases I’ve discovered met, but I also don’t have 100% of tests passing, so I’m happy for help getting that to 100%.

To come back to the original question:

With the tool @PGriffith created we now use the following workflow with git hookscripts (hopefully temporary):

Optional but useful: ensure that git hook scripts are always executed on all systems you are using!

Quite an effort only to avoid autogenerated content in the repository, but so far this works just fine. Maybe this helps someone to create his own personalized workaround.

Have you tried this one?

If you can get rid of all the “last modification” information this is an easy way to do it which also works. I thought it was nice to keep as much of this information as possible, but honestly git manages that for you so if it does not cause any problems with Ignition we do not really need it.