If I create an instance of a class in a view like this: 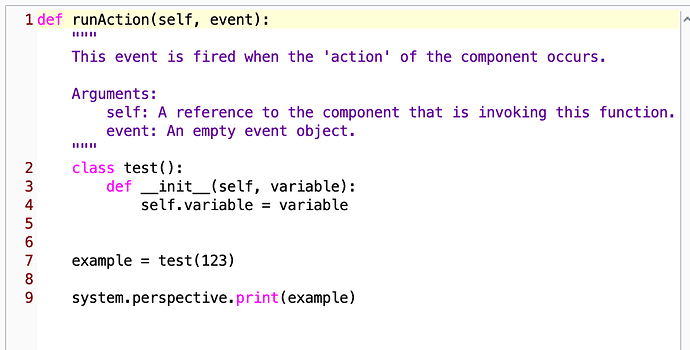 That class is given a place in memory i.e. <__builtin__.test instance at 0x8>

If I know that memory address, is there any way that I can recall the instance of test on the second button in this page?

I don’t know if Java would allow me to do this or Python, but it would be convenient for a few use cases.

I guess another way to ask this question based off the problem,

Is there any way for me to instantiate the class in button one, and reference it in button two.

I know that I could make it serializable, store it as an object in a custom property, and then de-serialize it in the second buttons script. However sometimes you just can’t make thing serializable, so I am trying to see if I can get around that.

Is this just a Map in the jvm? I see that they persist across gateway lifetime which leads me to believe the instance still needs to be serializable, is this correct?

I see that they persist across gateway lifetime which leads me to believe the instance still needs to be serializable, is this correct?

I think what that line means is that your globals map won’t be emptied every time your scripting restarts from e.g. saving a project. Not that it will be persisted and accessible again if your gateway restarts. The contents of the map do not need to be serializable.

If that’s not actually the case then I have no idea why the documentation team wrote that.

Just tested it with a publish and my example still works!