We have currently running an PLC for our HVAC installation. It’s possible to connect to this PLC via BACnet. I’ve tried a lot of things but i don’t manage to get a connection between our Ignition server and our BACnet device.

I think the problem is situated in the setup from the local device. There you have a binding and broadcast ip adres.

Our Ignition server and BACnet device are not on the same gateway so they don’t share a common IP. Could anyone give tips to make this connection work?

You need a device on your gateway’s subnet that can act as the BBMD which will broadcast to the rest of your BACnet devices. If you don’t already know about BBMD, this article may be helpful.

I don’t know much about BACnet. But aside from putting them on the same network. You could use some sort of VPN Tunnel/Bridge to let them communicate. I would probably forward @josborn linked article to your IT department if you have one. As it might be something which concerns them.

I actually went down that road before i fully understood (probably still dont) what BBMD was. My contact at IT said it could be done but was probably not the right way to go about it. Another possible option is to use a second network interface on a subnet with a device you can use as the BBMD, though IT didn’t want to do that either =x

IT always wants us to figure it out without them. And they always seem to be the laziest department. lol

IT always wants us to figure it out without them

And then when you do, gripe about how you did it.

Y’all are so cynical. IT are the nicest folk around.

To be fair, i do have some really nice contacts at IT that are very helpful. Though i also have had a 5 year battle over my traffic being blocked by a firewall that i was told over and over was not being blocked, grrr…

The PLC has indeed a BBMD running. I’m able to find the BACnet server with an BACnet explorer (I’m on the 10.10.x.x range, BACnetserver on 10.12.x.x range) so the BBMD is working!

This means i wrongly filled in some of the parameters i think. On the ‘Local Device’ page on ignition you have the Bind adres and Broadcast adres. Im sure the binding adres has to be 0.0.0.0 (working with BBMD) but the broadcast adres i’m not sure about. 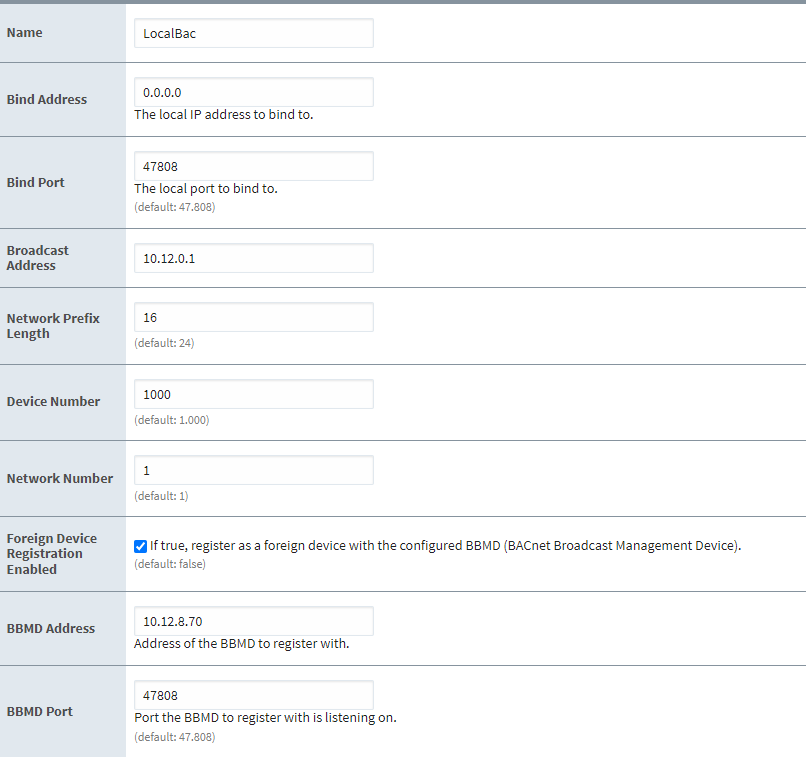 These settings shown here still give me an ‘Uninitialized’ connection

Pretty sure you do. I ran into this exact thing when IT assigned my VM an address on a different subnet than i was expecting. The conclusion i reached was you have to have a device on the same subnet, since routers block the broadcasts.