Using v.8.0.10, I have a view in MySQL, currently it returns 8 rows. I have a block transaction group that is DB to OPC, the OPC data size is 20. If I set the transaction group size/length to anything larger than the view row length, no OPC writes will occur. No errors, just no writes. Once I change the size/length to 8, it will start writing. Is this normal behavior?

I want to BUMP this issue.
I recently did an Ignition upgrade from v7.7.0 to v7.9.18. The project that I updated had several transaction groups that stopped working after the upgrade. Ignition would log that the transaction group worked fine but no OPC tags would be written. I found this post and reset the block size to be less than the number of DB entries, which resulted in a successful transaction where the DB tags were written to the PLC. If the block size was greater than the # of DB entries, the transaction would not write any tag values.
I contacted Ignition and after a lot of testing they confirmed that there is an issue the dates from 7.9.0 to 8.1.13 that will cause transaction groups to fail. I am not sure how it has taken so long for this to be discovered but hopefully it gets fixed in the next 7.9 and 8.1 release.

Hmmm. I don’t see this in the changelogs. I thought it was fixed recently. (Doesn’t mean it will be fixed for 7.9, though. That is very close to EOL.)

Closest thing I can find is described in the commit as “Option to write empty values for missing rows in block groups.”. It went into 8.0.11. 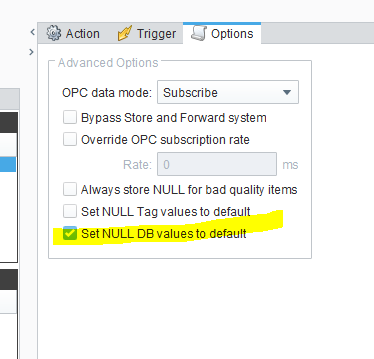