This may be a stupid question but… what are the circles above and below the whiskers on the box and whisker chart mean? There’s no mention of circles in the manual and I can’t figure out what they signify. Sometimes there is one and sometimes there are two. 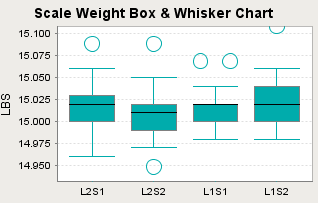 Those look to be be outliers.

Outliers are values that are 1.5 times the IQR (the size of the box) distant from the end of the box.

There are also farouts, which are 3 times distant.

I tried to replicate a chart with outliers and farouts in it, but mine won’t display, just the box and whisker. Likely, there’s a hidden attribute that can be set to display those… 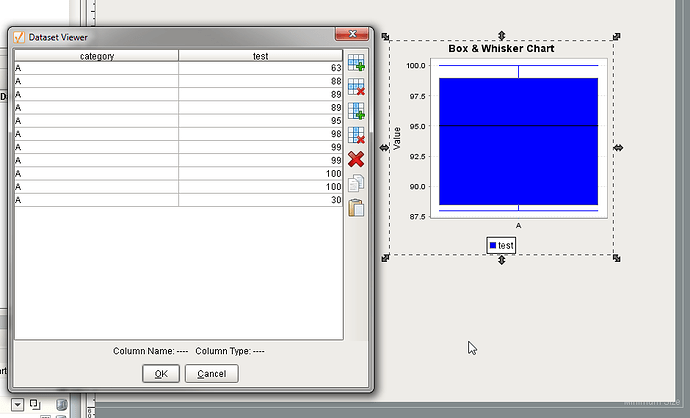 I was unable to reproduce that behavior, what version of Ignition are you running? Also, can you provide sample data from your dataset?

That’s what I had thought too but I don’t see any data outside of the whisker values (high anyway, I see some very low numbers) in my dataset so that’s what didn’t make sense.

Jordan is indeed correct. Those values are outliers. You have several outliers in your data, some of which are so extreme that you can’t even see the circles they would draw. L2S2 dips to 0.42 numerous times while it tends to hover around 15. 15.01 seems to be the number that everything is centered around and since most of your values seem to be very very close to that the entries such as 15.08 seem to be seen as outliers on the high end.

[size=85]Bumpity-bump… just a small, almost unnoticeable one… more of a tap, really…[/size]

Still working on this one. I imported Duffanator’s data and my box and whisker chart was drawn slightly differently, but I’m running a different version of Ignition. There’s a couple of issues still at hand, one being when exactly the outlier ellipses show on the graph. Using Duffanator’s data I deleted all but one of the outliers for a given column and the ellipse was still drawn. Also trying to figure out why they only appear on large sets of data.

Hi, is there any way to remove the outliers ellipses.