I am having some trouble with table booleans. They display as True in Perspective tables, regardless of whether the value is actually True or False. This seems to be happening in tables with a json formatted data parameter - the checkboxes/toggles display correctly if the table data is a dataset.

In the below table, I have selected that all columns render as booleans with a checkbox style. The same problem also occurs with toggles. 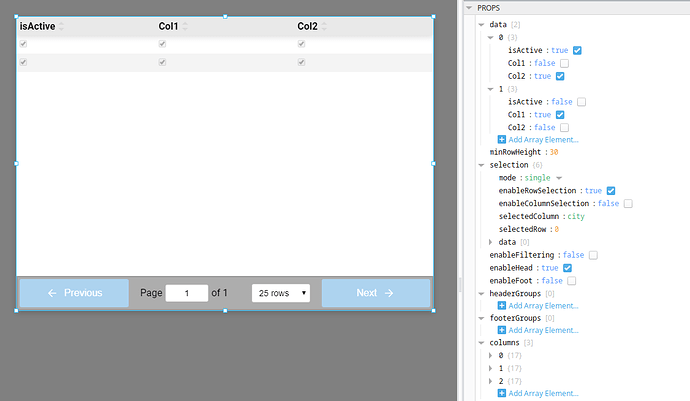 To add a bit more detail: the display works if the columns are something that may be interpreted as a boolean (eg. 0/1), but if the values are actually of boolean type it doesn’t work. When I bind the data to a named query selecting bit values, those bits are automatically converted to true/false if the return format is json - which I think makes sense, but it means I can’t directly bind my query to the table data if I want it in json format.

I was able to reproduce with your explanation. I’ll get an internal ticket written up for this. Thanks for finding that!

Yes, this was found after 8.0.2 released. It is currently fixed in the 8.0.3 nightly and will be fixed as part of that release.

Somewhat related to this issue. I am using a data set that has an editable column that is preset to zeroes. When I go to edit the column in run time, the cell type changes to boolean an does not let me edit. The same goes for a value of 1, but all other initially set numerical values allow me to edit perfectly.