Secondly, If an OPC tag defined in a UDT has an empty string for OpcServer, the OpcServer, and OpcItemPath are not displayed in Tag Browser. This makes troubleshooting the UDT difficult since it is not apparent that the OpcServer property is blank.

In the screenshot below, both tags are identical except that the second one has an OpcServer value of empty string.

Indeed I am having the same issue.

We still have some inconsistencies with how items are added/created for UDT Definitions that we have open tickets for, but I think everything you are attempting to do is possible in the Designer with your first issue.

Dragging and Dropping of items from the OPC Browser into a UDT definition is currently only supported via the Tag Browser. When moving it between these two windows, you will get a dialog like the following that will enable you to add the item/folder to the existing UDT definition.

For the moving of existing folders within an existing UDT definition, the Tag Editor does allow for this to be done when looking at the UDT Definition Type Structure view. When you move items or folders the UI will show moved items as crossed out tags/folders like so if they already exist. 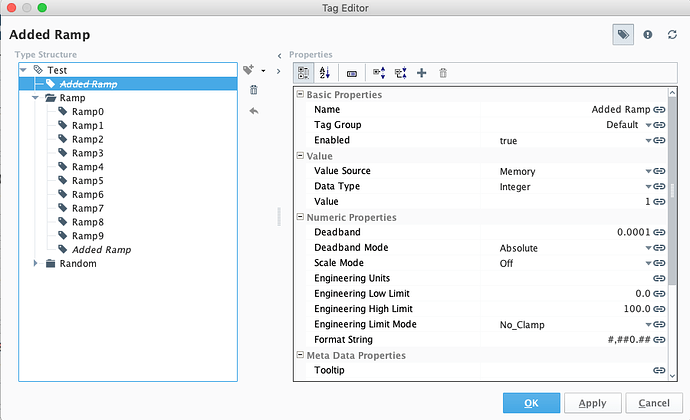 As for the second issue, we have an existing ticket to show all attributes for a tag even if they aren’t defined or a default value. With the change in 8.0 of Tag definitions being defined in JSON, the spec typically doesn’t send NULL null parameters so this isn’t as simple as it sounds to implement. We appreciate your patience as we work to coming up with a solution for this.