[BUG-14688] series.visible property on XY Chart having no effect

Well that’s sad. Obviously this is a regression as a result of upgrading the lib to resolve the memory leaks. We will look into this. Thanks for reporting.

I think the problem persists in version 8.0.6.
I try to put a very simple expresion to bind the visible Mete-property ({view.params.Visible}=1) and it seems to work well in the designer, but in the app you never see the component.

Do you know if it will be fixed in the next upgrades?

I was wondering if there was an update on this as well. I did get it to mostly work by binding to the “defaultState - visible” property of the series however when you turn on bullets on the line they show up even though the series itself isn’t visible. We are in 8.0.6 as well.

Any updates on this? Running into the same issue in our project

I’m not able to reproduce locally on 8.1.3. Are you using the XY Chart and enabling/disabling the series.visible property?

Yup I have 3 series and none of them disappear from the chart with any of their respective visible props. If I enable the legend, and deselect it there it works but I was hoping to use a script elsewhere. I can see my script working in the designer.
Stack or unstacked same thing. The lightest green is “Shift 1” 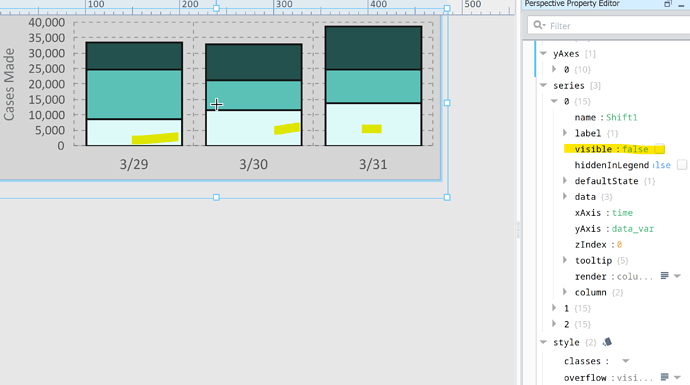