I am having a problem binding the series[0].data property to a Dataset (via a named query). The named query runs fine, the binding seems to be working, and the Time Series chart is not complaining about any bad properties being set (it does complain when the data property is set incorrectly).

The query is using ‘time’ as the first output, and then the numeric data next, as seen in the query (image below), so based on the documentation that looks fine. The component is reporting an error though, as seen in the image. There are no log outputs for the error however. 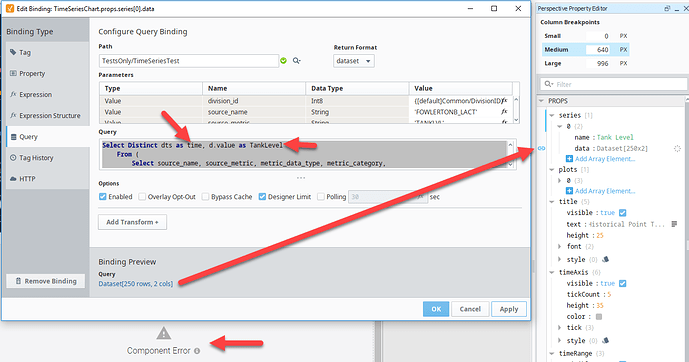 Make sure the data is ordered on the x-axis, ascending.

I ordered it in the query with your standard order statement (Order By dts Desc). The Named Query works as expected.

Oh nevermind, Asc. Ya, that did the trick.Thank you!

Good stuff. For what it’s worth, that’s somewhat expected behavior (the browser console should have some kind of an error indicating that the data is expected to be ordered), but we are still planning on doing something with the component to at least prevent it from completely blowing up.