We were on 8.0.4 and upgraded to 8.0.5 RC1 and non of our tags work and have, bad - configuration errors. When I go into the tag instances, they all have the error: “Structure contains invalid parent data types.” Any ideas of what happened?

Can you export the tags from 8.0.5 and post it here? Maybe in a PM. Also, if you had a tag export of the tags in 8.0.4, it would be really useful and allow us to troubleshoot whatever happened during the upgrade.

It looks like what you hit is specific to 8.0.5. In your case, you have some OPC items paths being built out of UDT parameters. You are using parameters in a composite UDT (where a top-level UDT definition contains an instance of a different UDT). For whatever reason, the top-level parameters are coming in as null on the OPC tag trying to use them. I filed a ticket to get this fixed, as something definitely broke between 8.0.4 and 8.0.5.

I still have this message for some binding with udt parameter. 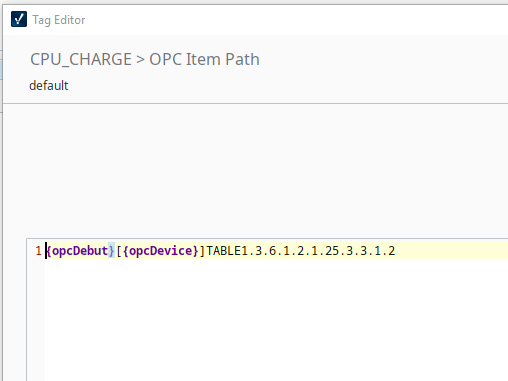 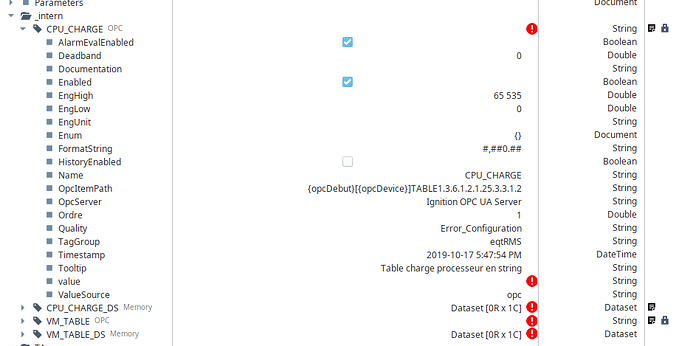 Restarting the tag has no effect.

I can confirm that upgrading to 8.0.5 stable has fixed our issue in the original posting.

Has anyone found any more information on a fix for this? 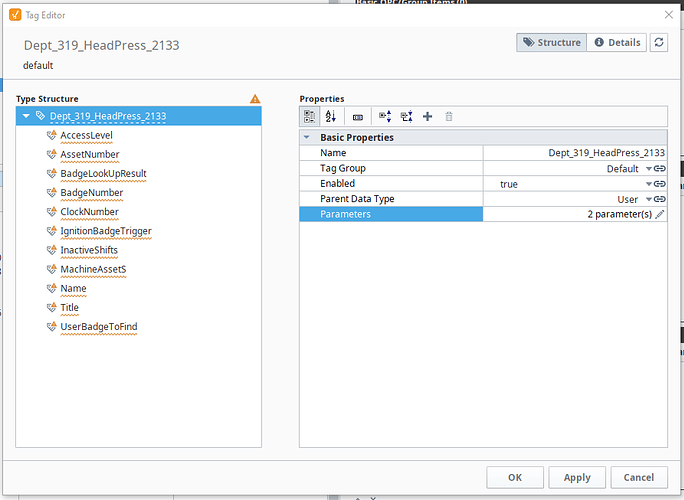 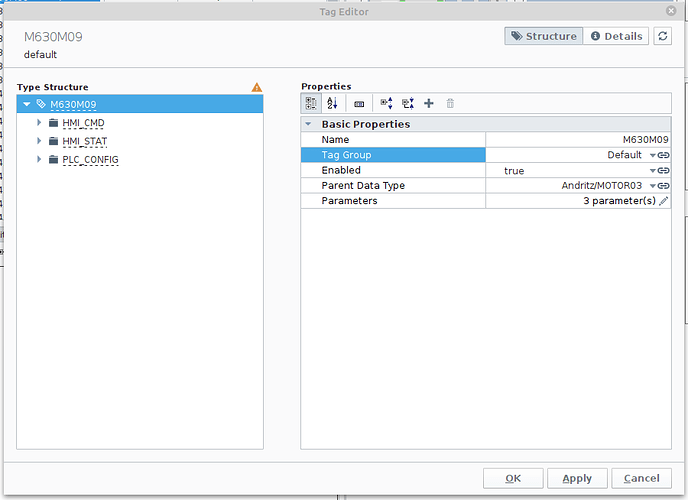 I have the same issue on 8.0.12 (a UDT which does not have a parent and which contains OPC tags having their OPC Item Paths constructed from UDT variables all showing an error state and with the UDT editor displaying the error “Structure contains invalid parent data types.”).

Hopefully someone from IA can chime in, but it looks like there has been several UDT fixes in the upcoming 8.0.13 release. I know my original issue I posted here was fixed in 8.0.5.

Not sure if it will help you, i found this thread after having problems after upgrading a 7.9 system to 8.1.0 LTS.

I imported a UDT from another server (all default settings were used on both instances) and I too had the same problem. The only difference being I didn’t get the nice squiggly lines to specifically highlight the problem area as in the screenshots above.

In any case, for me it was a typo in how the default ignition OPC server named itself on the newer install. The import kept the old name, but the new server name was different slightly.

Roberto Thank you very much. I found a solution to my problem a while back.

Here is a brief description, although it was a while ago so the exact details escape me.

The original programmer had copied a UDT structure to play around with.

Inside were some other UDT datatypes that no longer existed in the original project.

The import was not completing even though I didn’t receive an error, and I ended up with partially imported UDTs

I thought maybe the import is choking on the bad UDT once I discovered it.

I went back to the original project and deleted the Junk UDT.

After that the import worked properly.

I just want to add here that the Tag Group may be an issue when importing from old projects. To resolve just select all tags within UDT and set tag group to default or the appropriate group.

Had this same problem. (invalid parent data types). Ignition version 8.1.1
Was able to fix by . …

In the Tag Browser, the UDT tab

Guys, I am new to Ignition. I am using Ignition edge and I have an issue when creating a UDT and attempting to partially update the OPC Item Path. Since my UDT is huge and has several hundred members, I Create the Type from the OPC tag browser. This creates a UDT definition that has an OPC Item path that contains the actual Rockwell PLC tag in the path. To make this a "true" UDT, I want to change that PLC tag name to a built in parameter called {InstanceName} Without clicking on a thousand tags in the UDT and changing each one individually, I chose to export the UDT into a json file and use Notepad to search and replace. When I do this and re-import the UDT, I then create a new instance of the UDT and I get an orange triangle error "Structure contains invalid parent data types. It is a problem with the OPC Item path, The syntax is exactly the same in the UDT definition editor, but if I delete the opc item patch and browse to it again the little binding chain icon turns blue, the text is italics (sort of). I go into my UDT instance and look at the recently updated tag and it is working.

Has there been a fix or a work around that I am not aware of? Exporting, editing, and re-importing is something that should be easy, not painful.

Export with the one working element in place, and compare the json between working and non-working. I suspect there's a slight nuance to the punctuation/format in the json encoding that is throwing you off.