So I’m currently running a Trial version of Ignition and don’t currently have a license available yet. Our company has other licenses, but we’re testing stuff out right now and there’s no license provisioned for my use at the moment, so keep that in mind I guess.

I have a String Array Tag configured as in the screenshot below: 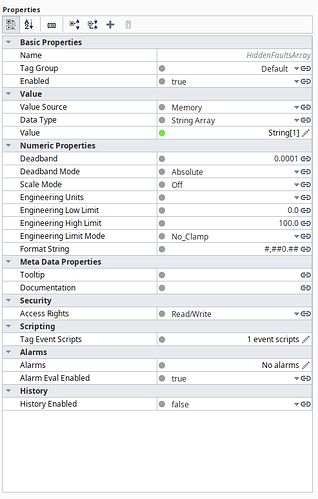 This tag is part of a UDT, not sure if that matters.

However, the value of the tag seems to eventually just get lost. The trial just now expired and I reset it and the value was still there, but most days after checking the system again after leaving it overnight, the value has disappeared.

This is a bug that we recently became aware of.

Is there anything specifically that I’m doing that causes the bug? Or is it just a bug with String Array or Array tags in general?

The ticket says it’s just any use of String Array inside a UDT.

We’ll update this ticket when it’s fixed. Should be relatively soon.