Currently running an 8.0.7 nightly from earlier this month.

When sorting on a render: number column (where the data in the data source is definitely numeric), the sort seems to go by lexicographic ordering. Screenshots of ascending/descending sorts below:

What is going on with this bug? It affects both integer and float columns.

We are aware of the issue and have an open ticket to fix the sorting, though there is no time estimate for when the ticket will be begun.

Any updates on when this might be getting fixed?

This is still happening. However, it seems like setting the column’s numberFormat to none fixes the sorting temporarialy. Probably only works well on integer-valued columns though.

@cmallonee I am still seeing this on 8.0.15.
Any time estimate on resolution for this?

No, the prioritization of that ticket has resulted in it staying more or less in limbo as we address other issues.

Thanks for keeping us updated. I’m really surprised that this bug has been going on for this long. I really needs to be fixed. But, I know its probably out of your control. I’m powerless as well but can only complain on this forum.

I will say that the poster above is correct, it appears that when you set the numberFormat to none, it sorts better

Any chance this has been fixed in 8.1?

No. We’ll update this post when it is resolved.

As mentioned in a post above, setting numberFormat to “none” does appear to fix the issue, but it would be nice if this works by default whenever the render format is set to “number”. 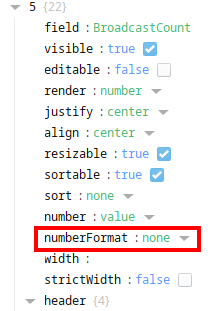 I’m noticing that numberFormat none fixes the issue and then a script transform where I round the values can set the format in a round-a-bout way.

For anyone following this issue, according to our internal ticket for this, this should be fixed as of 8.1.6.

To follow up, I see this note in the 8.1.7 release notes. Can someone confirm that this corrects the issue?

I recently upgraded to 8.1.10, and it doesn’t seem fixed at all. In fact, even the numberFormat = None doesn’t seem to work. Here is some data from a table

Here is the last page of the table, it is indeed sorting lexically instead of numerically:

Here is the fileSize column spec: 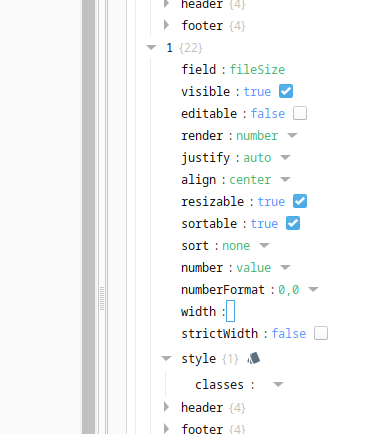 This does the same thing whether I call the render number or auto, numberFormat = 0,0 or None.

I did see it work once when I was fiddling with it, and was happy, then rendered it again and nothing would work for me.

Is there a version it is working in?

I didn’t know how you setup your sorting to begin trying to sort either.
Just check the box sortable?
I have a dataset. I don’t see the checkbox.

In my case, I think I can do cases in my order by clause of my query alternatively, but then I have to add a dropdown.