I am trying to get data from a UDT (with OPC tags connected to a PLC) to dynamically load interlocks for a perspective view. Part of this UDT has a bool value “Used” which is true when that interlock is being used in the PLC.

To display this, I am trying to bring in the UDT via tag binding (direct for now, indirect later) and use a script transform to filter out the objects where “Used” is false. I have it pretty much figured out, except that my result is just a PyString and not an object and I cannot seem to figure out how to cast this correctly so that I can use each interlock’s object values as params for a view repeater.

Here is the script:

Here is a screenshot of the code for more reference: 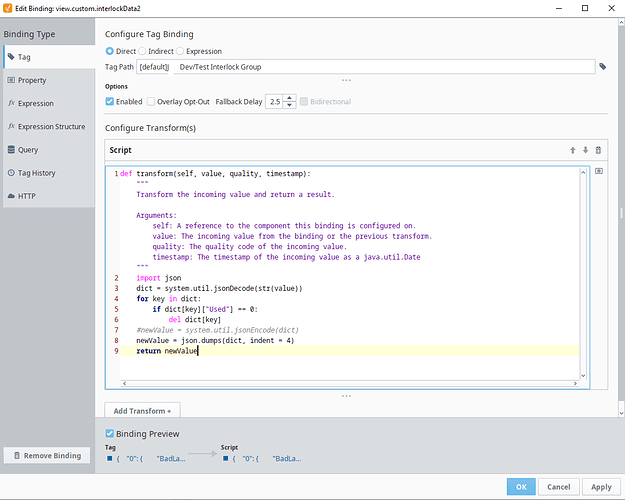 Here is the result of that script on the binding:

Thanks for the reply! This worked to solve the initial problem, however I actually need an array (I thought I needed an object but I was wrong).

I had originally named each object 0 through 6, but the python dict was not a fan so I added an “i” in front.

Ok, after some google searching and experimenting, I just needed to declare it as a list via:

Thanks for your help!!

Will return a list of your objects, but if you just need the values they contain, then yes, my_dict.values() will work, and you shouldn’t need to wrap it in a list.