I can certainly sympathise with the markers of the certs, especially marking those done by people who clearly have no idea what they're doing since they're completely new to the product. I think the biggest mistake IA made was to make the certs free, as this just incentivised companies to get everyone they could certified, regardless if they had touched ignition or not. When it was paid, they made sure the people had a good chance of passing as it cost them money.
I also appreciate the unscalable nature of test marking though for an expanding product! It's a tough call any way you look at it.

Also, I feel bad now for not putting in any jokes in my certs, haha

I found the feedback from the exam marker very useful. Even though I got the questions "right", they gave other options and useful information. I was very impressed by this as they really knew their stuff.

Some kind of filtering based on years of being an SI or a fees of say 100 or 200$ for taking the test will ensure seriousness among the test takers perhaps!

$200 for a company is peanuts, they would still keep sending all their drones. It needs to be high enough for failing to have a negative consequence, but not so high that they don't even consider it. It also obviously needs to pay for the time of the marker, test designer, maintenance etc. as well, which is also why the free certs was a bad idea imo. If something is free, people will abuse it

Also, I feel bad now for not putting in any jokes in my certs, haha

Me realizing the certification grader would appreciate jokes in a submission.

Well at least I actually tried to go above and beyond in my submission.

Three years from now there will be a large number of people about to lose their certification status. Will there be enough capacity in the re-certification classes to handle them?

This is a good question. I can't say exactly what the re-certification will look like, but it will not be a 5-day course. It will be significantly shorter (and less expensive) than our current 5-day offerings. This should make capacity issues less of a concern.

I like the idea of re-certification not being a large time commitment. I feel like my employer will want me to retain my certification but they will also want me to continue to be focused on Ignition projects.

So we spoke to our local distributor yesterday and I feel more confident now that the new training method of certification will still hold its value as a means to gauge capability. The courses will fail those who don't meet the level of understanding required, as determined by their lab work. Users will have the ability, as now, to resubmit their work after the course ends for up to a month I believe if they get things wrong. The courses will also be practical project-work based which I think is super important for learning and understanding. And, at least for us, they will be hosted by an ignition expert with 15+ years' experience (from memory) so there will opportunity to gain knowledge even for others with a lot of experience

From the newsletter: Inductive Automation will be providing a webinar on this subject December 6th: 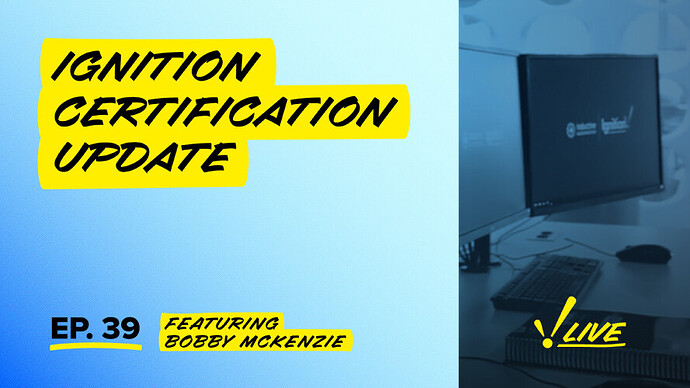 Join Training Manager Bobby McKenzie as he explains the details and timeline of the new Certification process, what this means for integrators in the Integrator Program, and the reasons behind the change, as well as addressing any questions from the...

I recently took the Core Certification test. Also, I have received training for some modules from Sepasoft and they follow the same route that IA have started recently. I can clearly say I have learnt a lot lot more taking the Ignition test rather than attending a 5 day class. I wish IA could continue with the tests!

Also, talking about economics, the new methodology of attaining certification would be very costly for SIs in developing countries.

I took the core test, and currently doing the gold test. Im finding it much more rewarding learning by myself, and figuring things out, then if I attended a class. I also think for employers is more benifical employing someone who figured it out on there own , as thus showing good problem solvings skills.

Im guessing inductive are worried about people collaborating, but lets be honest, I can't see many people doing that, as what is the point.

Labwork completion will be required to obtain certification. All labwork must be completed in class. We are not planning on allowing labwork resubmissions at this time.

To be honest it never occurred to me that people would take the test before watching all of the IU videos. We have all of our engineers watch the entirety of the university catalogue before taking the test (mostly because some answers are spelled out explicitly in the videos). Is it possible to lock out the test application if you detect that an account hasn't watched more than 70% (for example) of the videos?

You can't take a test without being credentialed, which is 100% IU.

But of course, this doesn't mean they have any practical experience at all, which the tests basically require.

So, on all the quizzes, I always went back and made sure to get 100% before moving on to the next videos, but is that even a requirement to get credentialed? Could the questions be more involved with things requiring the user to open a project and actually configure something or write a script to get the answer (somewhat like some of the build-a-thon challenges)? That would at least automate some of the testing that's required for even being credentialed. For DB access, a publically exposed DB with unique credentials generated per user for access to run queries off of (or even a DB import so you can use your own DB but the data would be standardized) so that all results would be known in advance so that the standard multiple choice or fill-in-the-blank could be used to check competency.

I'm certified in Wonderware as well, and I felt like their certification was a joke. It was just taking a test where most answers were straight from the manual, and some questions were literally like what is the default layout of the toolbars/panes when starting the IDE for the first time, which is a meaningless question that has nothing to do with any knowledge of how to actually use the software to build a project.

I almost think even making being credentialed a prerequisite for the in-person training should be required so that you don't get a room full of people who have never even installed Ignition or played with it. That way, time in training for the certification can be better spent on skills and knowledge rather than learning the basics.

On another note, I think it would be super helpful to have some sort of training specialized for sales teams (could be online only with no certification). While I don't mind helping the sales team out with spec'ing a project, I feel like they could sell the software better with training as well. I'm going to work on some internal training for sales/quoting for now so that at least if they're talking to a potential client that they can answer some questions without having to make a call for some of the simple stuff.

So, say an idiot like myself goes to submit the labwork... in what circumstance would I fail? What will prevent the lab proctors from easily passing everyone (which, in the heat of the moment, is what will happen - 20 people coming up at once to get their lab submission approved, etc).

Again, seems like there will be no point in taking this cert anymore, if there was one before. It doesn't prove or show anything besides that your employer sent you to training, which is what the certificates were for.

It sounds like they do pass everyone - was talking with someone who took the class last week and there were people struggling on day 5 with basic navigation principles and "passed".

There is a point for the certification though if you are an integrator and want the integrator discount on software. Even if you have to take a new class every 3 years to maintain it and pay for it - we still need the discount to provide competitive bids to projects against integrators that maybe are not "certified".

But then what would stop the integrators who aren't certified from sending a few people to training and being certified themselves? Even this point you bring up doesn't seem like it would matter, even in the short term