It has been a while that I am working on a project and I am working on it every day. Today I suddenly realized that when I launch my project I cannot do anything! The client freezes and hangs when I launch the project. Even when I do some changes to the designer. I do see this on launcher but I cannot click on it. I am using version 8.1.6. I restarted the gateway, my PC but had no chance to make this work!

I am stuck now. Any reason why this is happening?

I had a connection with a PLC over NJ drive device connection yesterday. I am not connected to the PLC right now, so I decided to delete the connection and all the tags. The problem is gone now. I do not know if it was because of the PLC connection or not but as soon as I deleted that connection, the problem got fixed.

There’s a good chance you had some kind of blocking action happening on the UI thread, which will freeze the UI until it completes.

If it happens again and you can’t figure out what that might be support can usually help you get a client-side thread dump to diagnose it.

Do you have a script that executes at launch or something at your initial screen? It used to freeze my notebook a while ago when i tried something too heavy

It seems that heavy scripting is not the issue then, so it might be more complex than i can guess.
But, about what you’re trying to accomplish, if it’s not working and you want to open this window at startup, you can right click it on the designer and set it to open at startup, you can do this with multiple windows and manage their placement on your screen using the docking configuration

Any client tag change scripts that might get triggered immediately?

So I have a tag change script on my client but that one is for an OPT touch button to switch the screens (Top, Buttom): 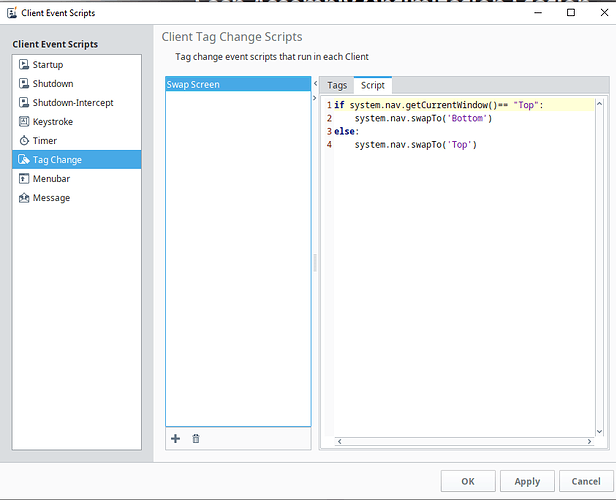 I am thinking this might because of the PLC, because I never had that issue before and as soon as I added the PLC, imported tags I had this issue. Although it was working fine when I was online with PLC but when I was offline I had that error.

Also, regarding my questions:

I have two screens:
-Top
-Bottom

I made this to work. So here’s what I did:

@bkarabinchak.psi made a good point and since you’re now connected to a PLC there’s probably a constant stream of tag value changes and with that in mind there’s a few things i try when i have a similar issue and don’t know exactly which script(s) is the cause:

Those are really great points! I will try to use them later on in my projects. Always a good idea to use print statement, console, or log to understand what is even going on!

Thank you very much for your help, Leonardo.

From the other topic, you showed code on a Vision propertyChange event that wasn’t checking the property name before your logic. This is mandatory. Many components are very “noisy”, and an assignment to a component property within an unchecked change script will yield infinite loops. And a stuck client or designer.

I totally agree! That’s a very good point. As always, thank you very much, Phil, for sharing your knowledge.

Mine started to do this today and it wasn’t due to any new startup scrips.

I had to uninstall the vision client, designer launcher, and nuked the .ignition folder in my user directory to get it to stop freezing.