I have been trying to set up an ABB communication with ignition to be able to control a set of servos from an ignition UI. I can’t seem to find the correct documentation or forum that explains the issues I’m having. I’m not sure what communication protocol the ABB PLC-s utilize, therefore I don’t know whether to use the modbus TCP protocol or the siemens 1200 or 1500 protocol. If anyone could point me in the right direction of at least where I could find the information I need then I would very much appreciate it.

The manual doesn’t paint a very hopeful picture. This thing definitely doesn’t talk Modbus or S7 protocol. It looks like it does CANopen. I’m not sure if even Kepware has a driver that will work with this.

Kepware has what’s called “ABB Totalflow Drive” but I’m not sure if that would apply to my use case here or not. I tried setting up the Etherenet connection for the ABB controller but couldn’t get it to work properly, I have it connected via USB currently and it seems like ABB’s own software is the only thing able to detect it.

ABB Totalflow is an entirely different device for a different purpose than these, I wouldn’t expect their Totalflow driver to work.

so how does CANopen work exactly?

You can start your trip down the CAN rabbit hole here:

You may also find this useful, if you are inclined towards the details: 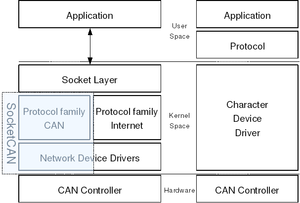 SocketCAN is a set of open source CAN drivers and a networking stack contributed by Volkswagen Research to the Linux kernel. Formerly known as Low Level CAN Framework (LLCF). Traditional CAN drivers for Linux are based on the model of character devices. Typically they only allow sending to and receiving from the CAN controller. Conventional implementations of this class of device driver only allow a single process to access the device, which means that all other processes are blocked in the mean...