They should be under a .ignition/clientlauncher-data folder under your home directory in a file called designer-launcher.json.

If you’re on Windows, you can open the folder by going to Start->Run (or Win-R) and typing:

If you’re on macOS, open Finder and press Shift-Cmd-G and enter:

You should also be able to use the preceding path on Linux.

I see the file in the clientlauncher-data folder and it looks like it does not have my old links in there. It does look like there are a bunch of connection urls in the designerlauncher.log files so I may be able to pull the urls that I need from there but if there is a way to get the old launchers back, that would be the best.

I’m not sure why they would have been deleted, perhaps some kind of change in your user profile or other system-level issue? If you could let us know what version of the Designer Launcher you’re using (via the About link in the upper-right), perhaps we can take a look. There are some methods for pointing the Designer Launcher at an alternative config JSON, is that a possibility for where your connection definitions might be (based on your usage)? 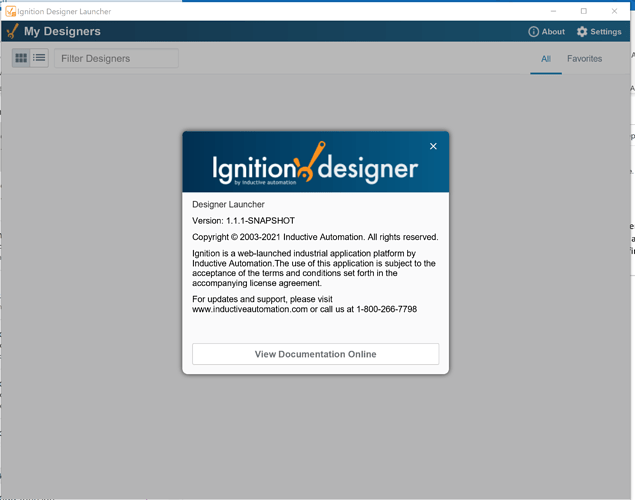 This is the version of the Designer that I am using. I am not using anything unique such as an alternative config JSON that I know of.

Based on the version being a -SNAPSHOT, it looks like you’ve got a nightly build version of the Designer Launcher (from an Ignition 8.1.1 nightly build it seems)… I’d recommend using one downloaded from an instance of the latest production release (Ignition 8.1.4 at time of writing). The version should read 1.1.4.