I have a working report with a lot of parameters being used in that report. I am wanting to utilize those groups of parameters in a different report without re setting all the same parameters by scratch. I have copied the good report, pasted and renamed it. However, what I do to the new renamed report is done in the original good report. Is there a way, that I am missing, to unlink the new report from the original?
Thanks for any help.

I'm sorry what do you mean linked? If you copied and pasted the report, it is it's own report that would be called separately and that you can modify separately. What exactly is the issue you're running into?

My solution to the issue.
I created a new project and exported the resources to the new project. Where as I would liked to have both reports in the same project, this fix works.

But when I start deleting schedules in the new report, it deleted them in the original.

Yikes, this sounds like a bug! What version are you using?

Are you sure that after you copied, pasted, and renamed the old report that you actually opened it? 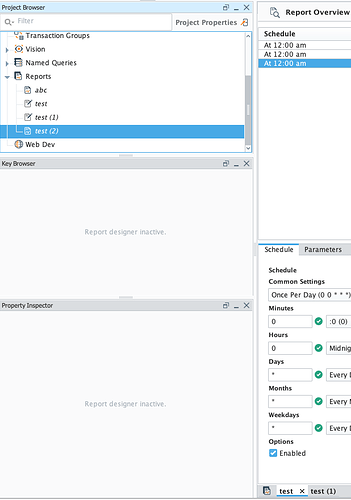 I would argue this is also a bug, but definitely less severe than one report deleting schedules on another.

The same thing happens for Named Queries. You can copy / paste (duplicate), click and rename but doesn't open. I've lost count how many times I edited the original query.

I could swear we fixed this. Do you have the version?

I could swear we fixed this. Do you have the version?

Now I'm second guessing myself on which one I was editing. I will try to recreate the issue tomorrow and give feed back.
Since I just created a new project and exported the resources, it was a viable solution.
I will post back tomorrow.
Thanks for the feedback.

Update, I believe Craigb may be right. I made a copy, pasted with new name, deleted schedules in new folder and it did not delete in original folder. I changed names twice, deleted more from the new folder,, it only deleted in the new folder not the original.
Sorry for the disruption and thank you for your help.

Glad to hear we don't have a serious bug to fix!