I have a dropdown that has a named query for a data source, the named query takes no parameters. There are now other value change scripts or bindings on the dropdown, or any other script that affects this component (it’s brand new on this view). When I was testing it in client to see that my named query results were coming through correctly I saw this -

The link takes me here. So it seems like this drop down is missing the return render() statement in react? Not sure how this is possible though. Also this component does seem to work fine when I am testing in designer, only in my client do I get this issue.

The component appears when I first load the view as expected and stays ok, but once I select the drop down to pick an option, it changes to the Component Error graphic that you see in my original post.

For completeness here is my named query - 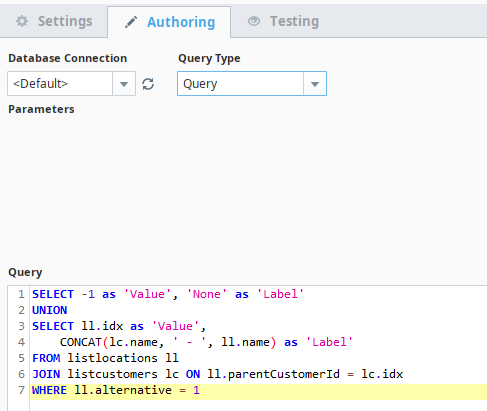 It’s in a column container. I just tried the other dropdown in my view which used to work fine and now the same thing is happening with it as well.

Edit: I don’t see where the basis is set for the component. But the basis for the column container is 880px.

Noticed too here that I am seeing a weird numeric label appear that I did not put anywhere, and that I cannot select -

Don’t know if that’s normal. Full disclosure - yesterday I directly modified the JSON file to add a row but moving the rowIndex of a bunch a components down one. Perhaps I messed something up in doing that.

Right now though, you think I should upgrade to 8.0.15 and see if that fixes things?

Actually, this looks like a different bug I opened a long while ago. Do you have a component in the last column of that row?

There is a known bug which can occur when the final component in a row of a column container enters a state which would trigger a quality overlay the column container reacts in a manner which results in other components displaying errors. This bug has NOT been fixed yet, so upgrading to 8.0.15 would not fix your View. The current workaround is to prevent the component which would have a quality overlay from entering that state.

Any chance you could provide the view.json file for the View you’re using?

Nothing in the last column of the row, only the button with the + sign which is in the 10th of the 12 columns. At least for these rows. I do have rows beneath this that have tables that stretch the full width, 12/12. Attaching the Json. The components name is DD_AltLocation.

It doesn’t need to be that row. The overlay which occurs results in the column container re-drawing its internal components across all rows.

It’s going to be impossible for me to tell from your View where the error is occurring since I don’t have the same data backing the View. Also, what you sent me does not contain some components I see in your screenshots, so I might not even have the problematic component.

Ok, in that case yes I have three tables that take up the whole width in their own separate rows underneath these dropdowns.

I just checked small/medium/large and there are no visual changes, no components are getting resized or moved about in this view.

And yes whenever I select any component it seems, I see this red line with this numeric label like such - 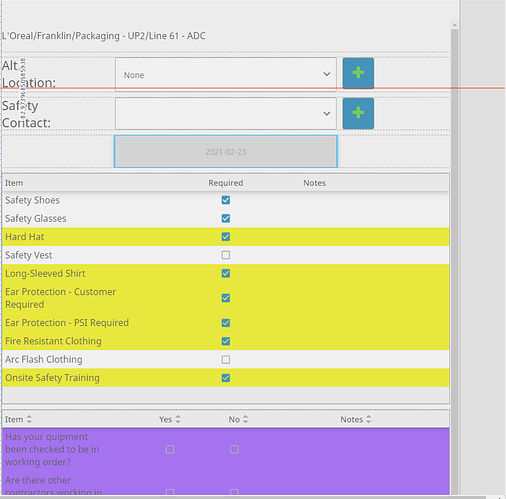 Perhas I sent the wrong thing. I exported the whole view and attached it here -
SiteSafetyFormExists.zip (46.0 KB)

Ah, many components are hidden behind binding evaluations which are faulting since I don’t have the data.

Do you have an unmodified copy of this View from before you modified the rows to allow for a new top row? I’d be interested to see if this happened in the unmodified View - just to rule out any errors when you modified it.

Heres before I modified the JSON to add a row/before adding the additonal dropdown/label.SiteSafetyFormExistsBeta.zip (12.3 KB)

Like I said, I probably won’t be able to replicate the issue since I don’t have data backing anything. Try saving your modified changes somewhere and then put the original file back into place. Do you still encounter the error while using the original file?

Yea it’s fine now that I reloaded the old one and manually moved everything by a row.

Unrelated I am starting to see this error in production on another unrelated untouched view. This one had been in production for a while and I don’t recall seeing this error before. The only changes done to it were when we upgraded from 8.0.12 to 8.0.14 two weeks ago.

Here is the view if you want to take a lookassetSelection.zip (21.9 KB)