[Feature - 12943] hasRole() Runtime Exception: Function does not work with 1 arguments

When trying to use an expression binding to enable or disable a perspective component based on user roles, using the following expression:
hasRole('Service')
I get the error
RuntimeException: Function 'hasRole(role, username, usersource)' does not work with 1 arguments
The documentation for this function shows that username and user source are optional in the client scope, but required in the gateway scope. I understand that I’m developing on the gateway, but I used this function extensively on v7.9 and never had this issue

Am I doing something wrong, or do I need to handle user roles differently in perspective? I don’t want to pass the usernames if I can avoid it because I don’t care which user is logged in, I only care what roles they have (that’s the whole point of roles, after all).

In Perspective, ALL scripting functions execute Gateway side. Due to this, when you’re examining scopes and execution you should consider all functions/methods/calls made in Perspective to be Gateway scoped/executed.

If you only want to know if the current user has a role, you could avoid using the function altogether and instead use the session.auth.user.roles property in the session properties.

@cmallonee is correct from a technical standpoint.

I think this is worth discussing internally though to see if there’s anything we can do, much like we implicitly provide the project parameter to many gateway-scoped scripting functions in 8.0.

Edit: meh, Cody’s update pointing out the property is available obviates the need.

That makes sense. Is there any documentation available yet for session.props? If not, can you give me any pointers on what expression function I might use to determine whether my user has a given role? I’m presuming it’s not just as simple as session.props.auth.user.roles = 'MyRole' since presumably roles would be a list or dictionary containing every role assigned to the currently logged in user?

You should bind against the session.auth.user.roles property, then use a script transform:

That seems more complicated than just using hasRole(), even if I do have to pass the user name in. Especially if I have multiple conditions for enabling, and the user role is just one of them. e.g. the old way would be as simple as
hasRole('Admin') && tag([default]System/SetupMode)

Perhaps I could just pass the current user from {session.props.auth.user.userName}? It doesn’t look like I can do the same with the user source, although in my case I can just specify ‘default’ so that would work in my particular instance. When I try this, I get an ExpressionEval Error (user ‘null’ not found in user source ‘default’) but presumably it would work at runtime once I get my user management structure set up?

It should work at runtime. The Designer doesn’t populate the session.props.auth properties because there is no authentication taking place.

Thanks, I’ll get my user management set up in the next couple of days and see how I go.

I did just have the thought though - unlike the Vision module, it looks like I don’t have to log in to access Perspective views. So, when I first access the displays, the current username is null and the expression will once again error out.

I suppose it could likely be overcome by a startup script or something to log in a default user, but we’re starting to again get into the territory of significantly overcomplicating what should be a very simple check. Checking user roles is a very frequent operation in all the SCADA systems I’ve used - I’d like to think it could be implemented in a more straightforward manner.

You’ll need to account for those possibilities, which is part of why hasRole() won’t just “work” for Perspective Sessions; Vision required a login (and so you knew about the user’s authentication profile immediately), whereas Perspective content is as secure as YOU make it.

I did just have the thought though - unlike the Vision module, it looks like I don’t have to log in to access Perspective views. So, when I first access the displays, the current username is null and the expression will once again error out.

Also - just to clarify - you don’t have to allow public access to your perspective project. You can require authentication to get to anything, just like how Vision works - just change the Project Properties → Perspective → Permissions to not allow the ‘public’ security level. You will also want to make sure to select an identity provider on the Perspective → General page. 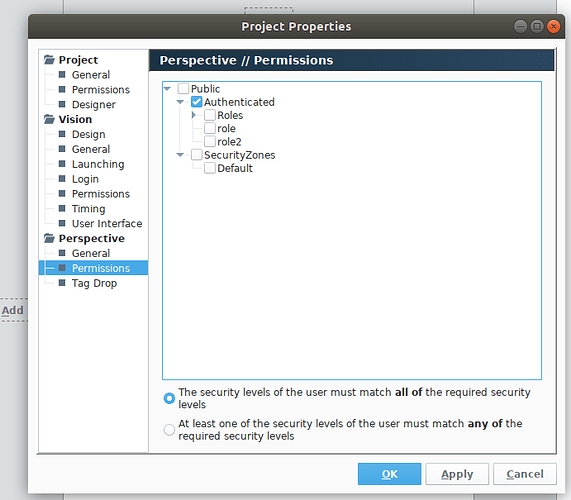 Thanks, I’ve checked the Authenticated box and now it redirects me to log in at launch. A few follow up questions on this:

What kind of startup script might I add to the session events to automatically log in a default user to a perspective session?

A driving force behind Perspective is security, and this is a huge security issue. “If everyone is special, then no one is.”

The notion of a default user in Perspective is very much the unauthenticated user, and so if your goal is to have everyone sign in as a default user, and apply settings in specific places which check against roles, then you should design everything to NOT check authentication except for the Views/Components/Actions for which you require security.

If you want everyone on a specific sub-net to have access, then you can configure Security Zones.

Typing session. and pressing Ctrl+Space doesn’t yet give me any list of functions to investigate either

This will never give you a list of functions, as session is not a package or library - it is an object which has only attributes (properties) for accessing.

The notion of a default user in Perspective is very much the unauthenticated user, and so if your goal is to have everyone sign in as a default user, and apply settings in specific places which check against roles, then you should design everything to NOT check authentication except for the Views/Components/Actions for which you require security.

Fair enough - I guess the thrust of what I’m getting at is that it’s become a lot more complex to check user credentials than it is in the vision module (or any other SCADA package). I can leave the system without a default user and only check authentication where I specifically need to, and that’s probably the direction I’ll take. But to use the example again of needing to check that a user has a maintenance login, and that the machine is in setup mode, it’s two parameters - the role and the tag.

Whereas in Perspective, if I don’t have a default user, I have to (1) check that the current user is not null, (2) pass three parameters to a role check, and then (3) check the tag value

It works, but it’s way more complicated than any other method of security vetting I’ve ever used. As you say, Perspective is only as secure as I make it, so I’d like to think that there could be a less tedious way for me to make it secure. If this is how it works for now, then I can work with it - I guess my feedback would just be, surely it could be streamlined somehow?

One idea - could I perhaps lump all of this into a common script somehow, and then just call the script? So my expression would become something like

…and then the script would handle the null checking etc, something like

Could something like this work, without having to copy the script to every component/view? Presumably I’d have to specify the user I’m checking roles against at somewhere, or would that be implied by the user triggering the script?

Something of this nature would definitely work, and is probably best* as it allows you to place all of the logic in one place, instead of replicating it over and over again.

You’d probably best be served by

*although in the event your role is null, your script example would return nothing.

Worth noting you can simplify that expression by a lot:
hasRole('Maint', toString({session.props.auth.user.userName}) && {'Maint_Mode'}
will compile and evaluate to the same result. You don’t need an if statement if your expression is already returning a boolean value, which the double ampersand AND operator will do. And you don’t need tag() to read a tag, you can just use the curly brace syntax (which will also be faster).

What’s your take on where I’d be best to place this script? In the Project Library shared scripts, or elsewhere?

I still get the evaluation error if no user is logged in, because “null” is not a valid user. As far as I can tell, I must pass a valid username to the hasRole function, or it will error out. If I’m not able to log in a default user automatically, I have to be able to handle the case of there not being a user.

Thanks for the tip on the tag() function though - I’m not sure why I thought that was necessary, maybe because I found it in the functions list and assumed it was the correct way to read a tag? Knowing that it’s not required simplifies a lot of expressions for me!

(edit: I remember now, most of the time I’m looking at tags in an expression, I’m looking at members of a UDT, called indirectly with a tagPath parameter. So I have to use the tag() function to build the complete tag path)

Definitely in the Project Library because you might want to use it in other Views within the project.

As with any other sort of software design, push the shared logic up as high as you can to avoid duplication and ensure uniformity.