Help needed for setting up Redundancy in Ignition 8

I am trying to set up Redundancy in Ignition 8 for some testing using two VMs but haven’t had much luck so far.

I have come across an issue trying to enable redundancy, and thought occurred that this may not be enabled in the beta. So I would like to confirm before spending any more time trying to problem solve. I have attempted to setup redundancy on an existing server, and just now a fresh install.

for setting up the Gateway Network Connections but the two gateways haven’t been able to connect.

In Gateway Network I keep getting the following error:

Windows firewall is completely turned off and I have no issues with pinging or browsing between the gateways.

Any suggestions would be much appreciated!!

Have you accepted the incoming certificate on the opposite gateway? Go to the Gateway Network section in Configure, then the Incoming tab.

Thanks for you reply.

That’s the thing I forgot to mention. When I go into the Incoming Connections tab, I don’t see the connection request from the Backup Gateway. I’ve tried changing the Connection Policy to Unrestricted and SpecifiedList but that didn’t make any difference. I’ve included some screenshots of the settings and status. Is there any other crucial settings I might be missing? 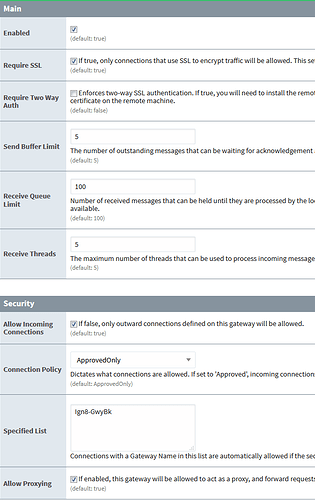 Can you confirm that the master and backup gateways are set up on separate machines? It looks like they both have the same IP address and port.

I created the Backup Gateway VM by making a copy of the Master Gateway VM. First thing I do is changing the MAC address of the virtual network card on the Backup Gwy VM.

In the Backup Gwy VM, I then change the following:

I went through the same process using Ignition 7.9.10 and no issues with getting the redundancy to work.

I’ve just installed Ignition 8.0.1 and went through the same process but still no luck…

The Backup gateway is definitely trying to make connection to the Master Gateway but it’s keeps on faulting on this OutgoingConnect(): web socket connection could not be established error.

Could it be some Windows or SSL thing in the background that’s blocking the connections?

I did a fresh install of Ignition 8.0.1 for the Backup Gateway on a different VM and a new certificate with a different serial number popped in Master Gateway’s Incoming Connections tab and now the peer connection is good on both gateways. It looks like the problem was because I duplicated the Master Gateway’s VM and both VMs had the same self certificate…

Thanks a lot for all your help!!