High memory usage on gateway that only has perspective?

Started helping a coworker on a pretty fresh perspective project - only 5 views, no clients currently connected, a few SQL tags. I see a high usage warning -

Anything else that would be needed to figure out what is causing this I can provide. If someone can point me in the right direction as to what’s causing this I want to refactor before going back to feature creation.

What does the memory trend look like? I’ve seen a gateway give this warning just before doing garbage collection and going back down from 2 GB to 300 MB. Then it gradually ramps back up to 2 GB and the cycle repeats.

The thread dump doesn’t really tell much of a story; the really useful thing would be a heap dump, but it’s a somewhat more involved process to capture. 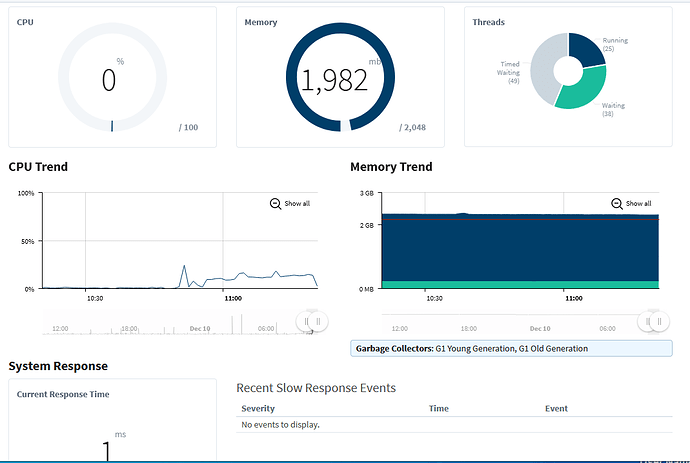 I’d get JVisualVM and start with that.

I think 2GB is a really small amount of memory for a gateway instance in general. Consider bumping to 8GB or higher.

Yeah, that’s not a case of JVM just going up near the limit before garbage cleanup. 2 GB isn’t much memory, but it sounds like your project shouldn’t be using much yet either.

I would second the comment that 2gb isn’t enough memory.

This might be related to a memory leak issue with Jetty, the web server library we use within Ignition. could you add the JVM arg -Dperspective.ws.disablePermessageDeflateExtension=true to your ignition.conf and restart the gateway and let me know if it the memory usage remains maxed out?