How things work - compiled vs interpreted

Could you please help me to understand why ignition has to be interpreted while running rather than compiled. What are fundamental reasons for compiling not being possible?
Regards

Which parts are you referring to as being interpreted?

scripting part uses jython 2.7 and for sure it is interpreted but i was wondering if some other language was used instead of python - would then compile be possible at all?. Apart from scripting in jython we have internal language which is also interpreted, then if somebody is experience its possible to write extension in Java - that would be compiled correct? Trying to organize a little bit my understanding of ignition architecture.

Python is interpreted, but Jython is actually compiled to Java bytecode and hotspot compiled by the JVM into native code.

If you wrote a module in Java with the SDK that would also be compiled.

The expression language is interpreted.

The expression language is interpreted.

Well, if you squint. The java call tree during execution of an expression is really clean. I’ve never seen it slower than runScript() or my objectScript() for comparable operations. Setting up the jython execution environment is expensive, no matter how optimized the innermost jython becomes.

You generally don’t need to worry about the performance differences and if you’re doing things “right” you generally aren’t forced into making a decision between Jython or expressions.

@pturmel in expression language i can see runScript command but not sure what did you mean by objectScript. Any chance you elaborate please? 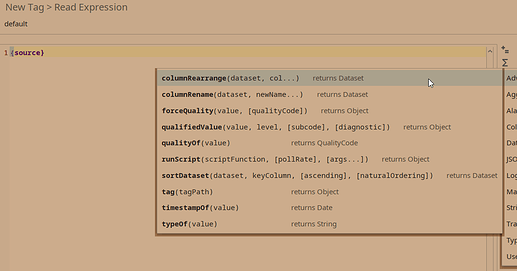 what did you mean by objectScript