How to properly copy a list of dictionaries in python?

I’ve been having trouble with a script and I isolated the issue to the fact that my for loops are somehow modifying an unrelated list (as far as I can tell). I replicated the result with this piece of code: 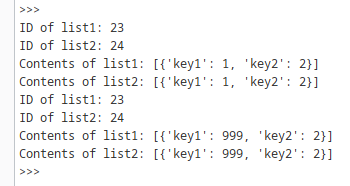 This makes absolutely no sense to me, because the IDs of the lists are different, but the code modifying list2 somehow also modifies list1…

This piece of code works as expected:

Does this have something to do with dictionaries? I am very confused…

If it is the dictionaries, is there a proper way to copy a list of dictionaries to actually create two different lists?

I would appreciate some insight.

I think it has to do with deep vs shallow copying. I only know this because I ran into a very similar situation earlier this year.

Thanks for the reply. That’s what I though at first as well, but I’m not simply doing list2 = list1. But rather list2 = list(list1) which doesn’t copy the reference, but actually makes another list.
The IDs of both lists are different in the above example, so the code should be referencing different lists.

I tried copy.deepcopy() and it worked. Thank You!

Actually, it makes a different list containing different references to the same elements.
The key thing here is that your list contains references, not values. When copying the list, even if it’s a brand new one, the things inside still reference the same things.

This makes sense. Thank You for the reply.