How to run Script faster

I need a help to stop freezing my screen! Before I begin I did try to achieve result with invokeAsync but still facing some delay.

I am still looking to do this by using later.py posted by Phil. Any suggestions are appreciated.

Sound ideal to enable cache property for that named query. Are you using named query right?

Yes but I don’t face much delay while getting the record from DB. The problem comes with script transform because of lengthy data

I would first try to optimized your script. If data is loading fast from DB maybe the bottle neck is happening in your script. Post it to give it a look.

Sometimes is not a good idea to used scripting transform from binding with such large amount of data. Try to use custom methods instead triggered by (when data is loaded from db).

If that doesn’t work maybe I would use system.util.sendRequestAsync - Ignition User Manual 8.0 - Ignition Documentation (inductiveautomation.com) as last resource.

Then we need to see the script.

But as mentioned, post your script otherwise we can only speculate.

You could try to use the db query to filter the data and not with scripting. Here is an example, you define all your filters as parameters for the named query and when you run the query, supply only the parameters (filters) that you want to use.

What @dkhayes117 is saying is a good rule of thumb. Your database will be faster at sorting your data via a where clause than jython will be, let the database do what it is good at and let jython do what it can.

Also if script is running in the backend and operator changes filter in between, that goes into queue

Do you mean “backend” as the gateway? Or did you mean background, as in invokeAsynchronous?

Sorting in SQL is done with SQL ORDER BY not WHERE… My favorite SQL guru says that SQL Server is the second most expensive place to sort data: 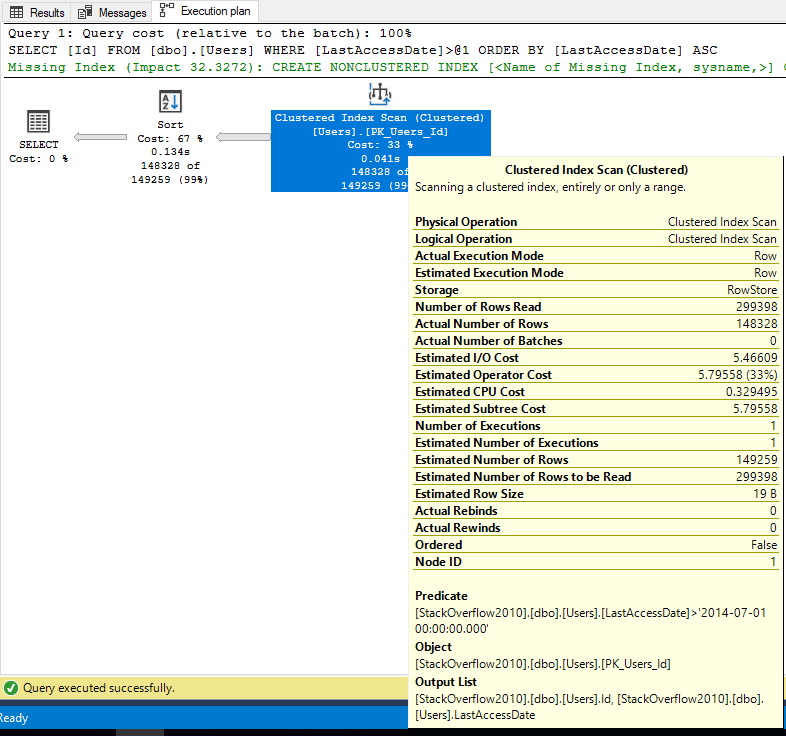 How to Think Like the SQL Server Engine: Adding an ORDER BY - Brent Ozar...

Have you tried to increase the size of the innodb_buffer_poolsize of your database?

Increasing innodb_buffer_poolsize requires to restart the database to take effect.

You define all your filters as parameters for the named query and when you run the query, supply only the parameters (filters) that you want to use.

Just for my (and possibly others’) understanding, can you elaborate a bit on this query?

Sure, this named query is setup for system.db.runNamedQuery to only supply the parameters you want to filter by. Notice that the is null part is looking at the passed parameter, not the user field in the database.

When you omit passing a username, then the user parameter is null, so :_user is null will be true and the :_user in (user,user2) part will be false. Since these two clauses are ORd together, it is essentially a 1=1 scenario so the null parameter will have no effect on the query. It is important that each short-circuit evaluations are ANDs. If they were ORs, the entire database would be returned.

This example query, will return the record matching the serial param

This query will only return records where both style and fabric fields are matches.

This is great. Thanks!

Thank you guys for the tips! I updated the queries also as suggested by @dkhayes117 that really helped.

Also I smoothen the script using @pturmel later.py which is running fine. Only thing I faced for one longProcess which I called with later.callAsync, I got this java.util.concurrent.CompletableFuture@3251f305[Not completed]

However I did achieve the result by making inner function and calling the same (wo invokeLater as Ignition gave me an error that invokeLater not defined) and later calling my long process with system.util.invokeAsynchronous

And even if an appropriate index isn’t available, other steps in the query plan can be taken by the optimizer to make the sorting very fast.

And yes, even after all that it may still have to do some ‘expensive’ brute sorting, but except for trivial cases, the DB will be much faster at it than the jython in your scripting.