Last night’s build includes the configuration pages in the Gateway Web Interface for Security Levels and Identity Providers! You will find the two new links here: 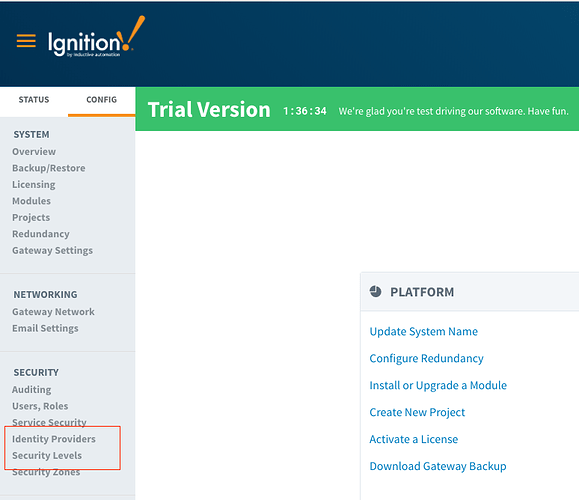 This identity provider will authenticate against any User Source defined in Ignition. This is useful for standalone systems that do not want to integrate with an external authentication system. It also provides backwards compatibility for users who wish to continue using legacy authentication strategies such as LDAP based active directory authentication.

This identity provider is used to integrate with an external IdP service that supports the SAML 2.0 protocol. SAML is also used by many third party identity providers, in particular: Microsoft Active Directory Federation Services (ADFS).

New in Ignition 8 is the concept of Security Levels. Security Levels are a platform-level construct aimed to make the permission modeling inside Ignition more convenient, portable. The idea is to introduce a stand-alone permission modeling system for use within Ignition, regardless of how identity was established. Put another way: security levels allow Ignition to have its own authorization system, independent of the authentication system being used.

Security Levels are defined gateway-wide so that they can be used by all projects, tags, and other systems on the Gateway. Security Levels are just strings (like roles), except that they are organized into a hierarchy. For example, you might have the following security levels defined:

The User Grants page of an Identity Provider gives the capability to directly assigned security levels to authenticated users identified with the unique ID or username.

There are three special types of paths that the expression has access to:

For dealing with collections in expressions, two useful functions are available:

While Identity Providers and Security Levels are Platform-level capabilities, the Perspective module is the first and only adopter of these capabilities in 8.0.

User manual content for Identity Providers and Security Levels is in progress and will be published in the coming weeks.

How do you get the username now once they’re logged in?

system.security.getUsername() does not seem to work anymore. I get an error that the object has no attribute.

Are you talking about within the Expression on any of the Identity Provider stuff? Or are you referring to within a Perspective Session?

If the former, the system functions are scripting while the Identity Provider/Security Levels config is the Expression Language, and the script won’t typically work in an expression. To reference the username of a user within something like a Security Level Rule, you first need to make sure you are in a level within the Authenticated node, as those levels ensure the user has authenticated and we can obtain user information. You could then do something like Joel mentions above:
{idp-attributes:X} - access an attribute on the IdP response document where X = the path to the attribute on the IdP response document
That X could vary depending on what the IdP response document looks like.

If you are referring to the latter, you may want to check out the reference section in the user manual, as we have recently updated the scope of the functions to be more abundantly clear. https://docs.inductiveautomation.com/display/DOC80/system.security.getUsername
The function has a scope of Vision Client, which means it can’t be used in a Perspective session. As far as I know, there is a session prop that holds this information once the user actually logs in, though maybe someone else can chime in with more details on that.

To my knowledge you should reference a user’s username as a property with session.props.user.name.

To reference that same value in a script, you would want to use self.session.props.user.name.

Yes, thank you. That’s what I was looking for. Is there any documentation ready for those objects do you know?

Not yet, as the Auth content only made its way into the Beta this morning. The documentation should be in place in the coming days.

Awesome! Checking this out over the next week or so.

Hi guys, Can the identity provider be used to authenticate the Gateway page and Designer?

Not yet, although this is something we want to support in the future (no timeline for this yet).

Thanks Joel, look forward to it. It’s working very well for us on Perspective so it would be nice to have a common user management for the platform.