Every time I open a new window, for example, the console or the ‘new windows’ tab from the vision menù, it seems the JPanel instead of being opened in a separate panel, gets attached to the main IDE one, but still, there is a black screen being opened on the back.
When this happens, the ide becomes unresponsive until I force quit it and reopen.

Look lite a Java wrong behavior, does anyone know a workaround to force the ide to open these panels in a new window instead of attaching them to the IDE?

This is what is happening to cause the environment fault :

It seems like you’ve somehow triggered the native tabbing feature within macOS, but I’m not sure how… This is the feature I’m talking about generally:

We certainly don’t expose that functionality within the menu and I’m not aware of a global shortcut for it. You could try shutting down your designers and then clearing your ~/.ignition folder that contains some cached settings. As an easy test, just rename it to ~/.ignition2 and then relaunch the Designer Launcher (it will then recreate it). If you need to see hidden folders in Finder, just press Ctrl-Shift-. (period) to toggle viewing of hidden files.

I tried what you suggested but unfortunately is still presenting the same behaviors.
In fact, when I click on ‘Add new Window’, the pop up where I should type in the new window name, is docked to the ide, the mouse pointer starts flickering and no button can be pushed.

If I wait like 30 seconds, it seems to start working again, then I can use the window even if it is docked to the ide panel.

So basically when the JPanel is opened, it seems that something is processing on the back, taking something like 30 sec to give back the UI control to the user.

@mori.luca, while native tab integration has been a feature for a while in macOS, it seems that there is a new option in Big Sur to control when the tabbing functionality is used. See System Preferences->General and double check the setting for Prefer tabs. When I set this to Always, I saw the behavior you’re describing. It looks like the default for me was in full screen. 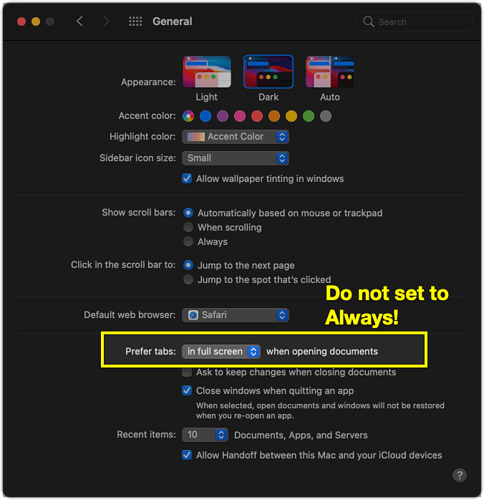 Can you check your setting? You might need to force-quit your designers before changing and retrying.

I’ll submit an issue on our end to look at this. Based on some initial research, there might be a way to adjust whether an application respects the system defaults or chooses its own behavior (which appears to be what we need to do here).

EDIT: you might need to set this to never if you’re using the Designer in macOS full screen mode.

Thank you very much for your time Kevin,
by setting to Never it works as expected.