Has anyone had issues with workstation not releasing a licence after it is closed?

We have a customer with a workstation\mobile only licence (count: 1). If I restart the client, then it takes a minute or two to release the licence so I have to restart workstation a couple times while waiting.

Ordinarily this is just an inconvenience during development since restarting the app is not a regular action. When the designer is open on the same machine, though, it seems like it takes much longer to release the licence\session.

Yeah it’s sort of strange, but when a Workstation instance is closed the session isn’t released right away from the gateway. It has to timeout like a normal browser session. I’ve written a ticket up to see if we can get that changed if the user does something to purposely close the session (such as clicking the X button or the “Exit Project” button in the app bar).

For the time being, at least a bit of a hack around to make it less painful, you can lower the Perspective Session Timeout setting which will make it disappear faster: 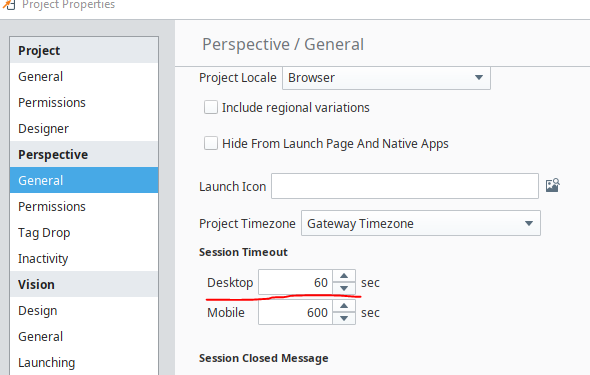 Awesome, thanks. That’s good enough for me, I just want it to release the licence sooner.