Whenever a row is put on the report , specifically my running time hourmeter from the SQL bridge module fills the row with list instead of a value , it also shows up normal in a seperate named query as a 0

I don’t know sql very well , its set up the same as the others and i can’t seem to find any differences anywhere

can someone tell me what this means? what causes it to put list instead of an int value like its set to be

I am assuming this is in the Report module. It would probably help if you included a picture of the table in the Design tab as well as the query you are running.

My guess is that something in your query is calling the wrong data to be grabbed. Another place you can check to see exactly what is being grabbed by your query is from the xml in the righthand pane from the Preview tab. You can look through that xml code and see what it says about that column and rows.

Another you could do is go into whatever SQL server you use and run a select statement to grab the Running Time and see what it returns there.

We’re tracking a bug internally that seems to line up with the behavior you’re seeing here. I’ve added you to that ticket. 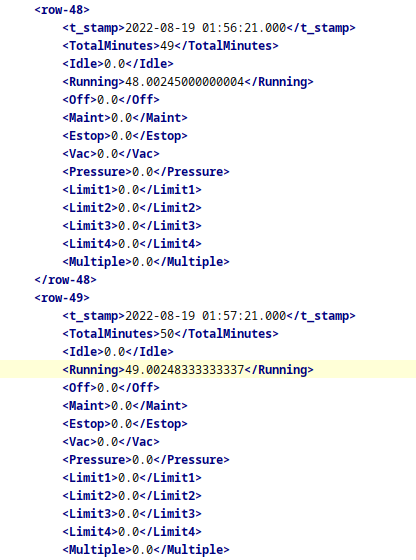