I’d be interested to know if it’s possible to run ignition Edge on Windows IoT? I haven’t been able to determine if an appropriate Java SE will run on it. I’ve pretty much only used Linux with Ignition, but the new Allen-Bradley CompactLogix 5480 looks interesting for an Ignition Edge application.

I know it’s still early for this product - just curious if someone has more info on this.

Hmm… from what I can tell Windows IoT Enterprise is basically the new Windows Embedded, which historically hasn’t been good news when it comes to running a JVM (certainly worth trying though…)

Windows IoT Core is basically just Windows 10 though, and should run a standard JVM (x86, not ARM…).

Well, after I posted, I found this Microsoft website that says Windows 10 IoT Enterprise is a full version of Windows 10 Enterprise, which seems like it should run Java SE fine. The Allen-Bradley 5480 has an Intel i7 processor just for the OS, which should certainly be powerful enough.

The site I found was not a MS site, so I think the information you found should be trusted more

@pphillips Nice, I had been wondering the same thing! I’m planning to get a 5480 and test it, so I’ll let you know how it works out.

I read something about the 5480 having an OPC UA server, presumably running on that Windows IoT side… can’t find anything in the available docs though. Curious to see if that’s true.

Found a slide that says OPC UA support is coming in “Release 2”: 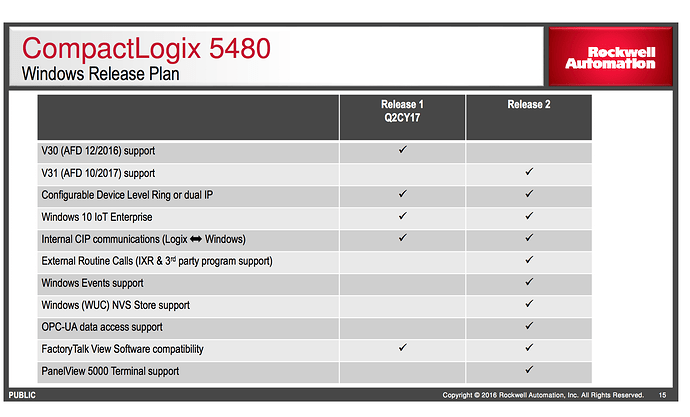 True. Product page also lists ability to run 3rd party Win 10 applications, so Java and Edge should work.
And with DisplayPort, I could have a local HMI screen too… It’s too good to be true, probably cost $20k

@hamlinjr More power to you if you can get your hands on one of these. My A-B contact indicated he doesn’t yet know when these will be generally available. No hints yet on expected pricing, either.

@pphillips Mine doesn’t know either, but he knows I want to know as soon as he does.

We talked with our A-B supplier today and he indicated that these may be available for sale in Aug.

He said that he may see it in June but that’s for supplier training and so forth. Will not be released at that point.

Rockwell is having a traveling product show in the next few months. I’d expect to see it there.
They do have a two day stop planned in Lynchburg…

Which is awesome, considering I’m in Lynchburg!

This bring new possibilities to the integration table. I was in a Rockwell Automation event in my city and the representative indicated that this new PAC has the potential to become in the new AB model. The software (studio 5K or alike) to program the Compact Logix will be included in the Windows IoT side, no more licence management BS.

Should work on any version of windows, correct??

Marketing copy being a little generous I guess. Any version of Windows that can run a JVM, same as it has always been.

Haha, that’s what i figured.

EDIT: For posterity, I should mention that, for these panels at least, you need to make sure to set all of your stroke ‘join styles’ to use one of the last two options; the first option causes issues occasionally (
Strange graphics anomalies in client) 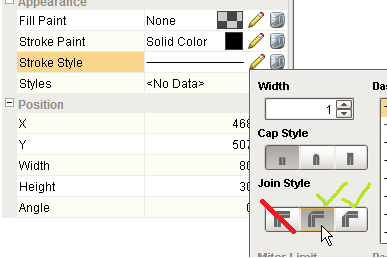 Good news. Are there any surprises with Enterprise or is it just like normal Windows?

We’re also running Ignition on Windows 10 IoT Enterprise (in our case on Beckhoff CX5140 PLCs also serving as HMI server for on machine HMI) with no issues. We are running an Ignition Server and a Vision client on these, but I suspect the Edge client shouldn’t have any issues either.