I’m using Ignition version 8.0.14. I’ve created multiple UDT tags and placed instances of them within a parent UDT. When populating the InstanceName parameter of the parent UDT into a value of one of the UDT instance’s parameters, it doesn’t seem to be pulling the parent UDT’s instanceName, but instead the UDT instanceName (control in the case below). Is this a bug, it doesn’t act the same as in 7.9 and doesn’t seem to be the intended result. 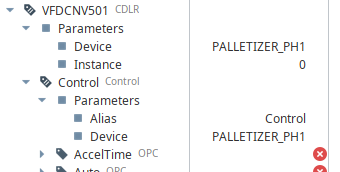 This is intended behavior, which means the behavior you were seeing in 7.9 was possibly a bug.

I appreciate the clarification on InstanceName’s definition. The parent level InstanceName parameter definition works as you described, thank you for the quick reply!