Hello, I am trying to connect to my company’s Kafka instance from Ignition. We have connected to other pub/sub platforms like IBM MQ via MQTT but I cannot find how to connect to Kafka. Can anyone share how they were able to make this connection?

you can perhaps found some help at 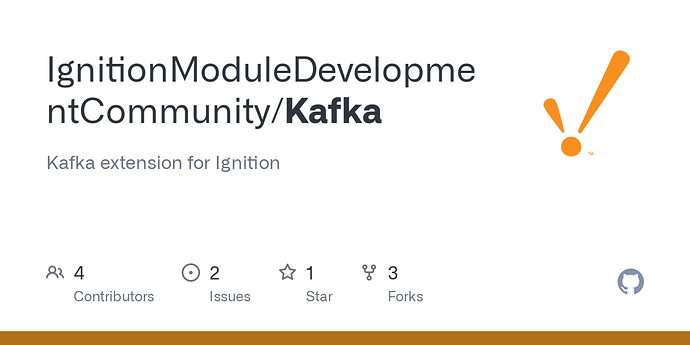 Kafka extension for Ignition. Contribute to IgnitionModuleDevelopmentCommunity/Kafka development by creating an account on GitHub.

Hello. I just cloned the latest from GitHub today and imported it into Eclipse from there. I see 8 errors and 33 warnings. The errors are “A class file was not written. The project may be inconsistent, if so try refreshing this project and building it”. There are various types of warnings. Is there something missing? Refreshing didn’t solve anything.

@kevin.deyoung I have nothing to do with that module, wasn’t even aware of it till this thread, but just wanted to say that I was able to clone the repo an run mvn package and it built without error. Given that, I suspect that your issue is an environmental/IDE one. I haven’t used eclipse in a long time so I can’t help there, but can confirm that I was able to import the project into the free/open source version of Intellij community edition and it was able to build/run as I’d expect in that environment.

Not sure how actively that repo is watched/maintained, but it may be worth it to post an issue on the github repo, maybe someone else is using eclipse and can help with the setup/configuration.

I’m sure that you are correct on the environment issue. I’m not sure what version of the JRE is required and I am a novice at best when it comes to Eclipse & Maven. I’ll continue digging and see what I can figure out.

I ran the module build using the AdoptOpenJDK 11.0.6. Given that Ignition is currently shipping with Java 11, you’ll want to use the same version for best compatibility.

JDK vendor shouldn’t matter: Azul, Amazon Coretto, AdoptOpenJdk, Oracle - all should be fine for developing and building the module, just make sure to note licensing implications if applicable to you/your organization.

this module just a consumer,but it import org.apache.kafka.clients.xxx.jar to ignition。
so we could make a producer in python just like below.enjoy!

Hello! I was hoping you could point me in the right direction, or had some more information on using MQTT to connect to IBM MQ. We already have used MQTT quite a bit, just curious how you were able to connect it to IBM MQ.