I have been facing an issue where the size of text on a label is noticeably different between a Linux and Windows environment.

I thought that since I was using the bundled Noto Sans font that comes in the embedded Java this would be a non issue.

Can someone please explain to me why there is a difference here if the same font is used in both environments?

You tagged this post 7.9, is that correct? The Noto Sans font was a changed introduced with the new Look and Feel in 8.0.

Yes it is 7.9 but I was under the impression that if the “Use Bundled Java” checkbox was used then the Noto Sans font is used for the Logical Dialog font. I can see those ttf files in the runtime folder under the vision client launcher install. Is this incorrect?

Hmm, might be right, I need to dig a little deeper.

Linux and Windows fundamentally render fonts differently, and there are also differences when anti-aliasing is applied or isn’t, so you probably need to get some screenshots to illustrate the differences you’re seeing.

One thing that can help on most Linux systems is launching with
-Dawt.useSystemAAFontSettings=on
set in the JVM arguments of the launcher.

Can you tell me where the JVM arguments are for the launcher?

Also will this option be overwrote if operations updates the client launcher later on?

EDIT: @Kevin.Herron . I sent you a DM with screenshots showing the issue. Both were running the bundled Java using version 7.9.20. Thanks.

Tap the menu icon on right of app tile in Vision Client Launcher and choose Manage. Scroll down: 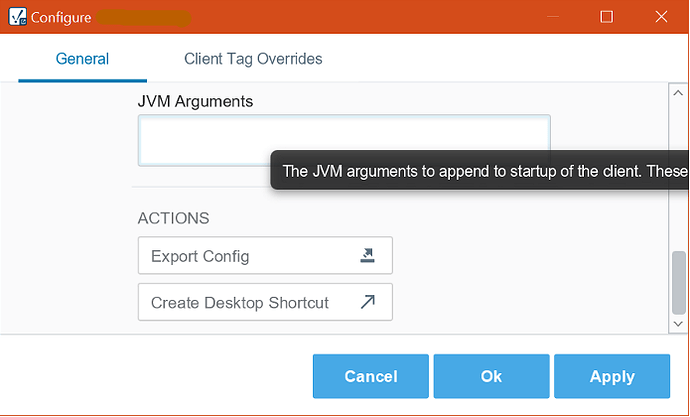 Thanks @witman. We are using the 7.9 client launcher and it does not have that JVM argument input.

In v7.9, the options end up in the shortcut. If you change it in the launcher, be sure to re-make your shortcuts.

Thanks everyone. I’ll give that a try.

You may also just have to “deal with it” and develop/test your screens on both OSes, because even with all the stars aligned there’s still fundamentally small differences in how the fonts will render and how components will need to be spaced. Screens do not render exactly 1:1 across OSes.

Leaving extra whitespace also allows for variations due to translations. In other words, if spacing is too tight between the two platforms, you might be in for bigger problems eventually.

The good news here is that the effort here is to move to Linux so I am just experiencing the small paper cut problems that cascade from migrating. Thanks everyone for the quick answers and suggestions. I don’t mind dealing with the issue if there is truly a difference between rendering as Kevin suggested.