Preface: this will be a stupid question. I’m linux-illiterate.

How do I upgrade Ignition running on my RPi4? I downloaded the Ignition - Linux ARMHF 32-bit zip file, but not sure what to do now… just replace the files in the existing directory? (previous version installed is 8.0.14). If so, I guess I need to use the command line with sudo, as I tried this already and it said I don’t have permission

I don’t know how you guys use Linux…

This was why I settled on using a Docker container. Much easier to upgrade.

Who says us Linux users don’t like creature comforts? Day to day, I use the command line for two tasks: manipulating my exotic in-laptop network emulations, and using git. The KDE desktop makes a work environment far superior to Windows, IMNSHO.

(And those exotic network emulations, which Windows simply cannot do, allow me to run Windows VMs with comforts normally not available to WIndows.)

What? Your IDE doesn’t integrate git?

As a daily user of MS and Apple’s OS, I prefer Apple over MS for ease of use. (However my work requires me to be fluent in MS). I dabble in Linux and BSD and know my lack of experience limits my ability to do stuff in them.

As a desire to learn more I am running Ignition under Ubuntu and widening my skillset. However one of the reasons I am liking it is not having to deal with MS licensing when spinning up a new VM (which has previously forced me into buying shady windows licenses from E-Bay).

Ha. I just remembered that my custom billing system runs under Debian. I have more skills than I remember that I have!

Vi FTW on Linux, and Visual Studio over Xcode. But on occasions I do use VS Code. I’ve never used a real IDE under an *nix , only the occasional graphical text editor.

What? Your IDE doesn’t integrate git?

It does (IntelliJ). But like most IDE’s VCS integration, it isn’t quite as convenient as I like. Using the terminal for git status and git add are much quicker in my workflow. And I occasionally need to commit parts of files but not other parts, and IDEs don’t do that very well. (yet?)

I’ve never used a real IDE under an *nix , only the occasional graphical text editor.

I would expect IntelliJ and the other JetBrains products to be identical under Windows. Get used to them in Windows or Mac and it should be seamless to switch to Linux when it is convenient.

Kate is a simply wonderful text editor, whether for code or for lighter duties. The others (Vim, Emacs, Notepad++, VScode, etc.) can all go hang.

And I occasionally need to commit parts of files but not other parts, and IDEs don’t do that very well. (yet?)

I like to use a mix of git command line and IDEA as well, but it does handle partial commits well enough for my needs: 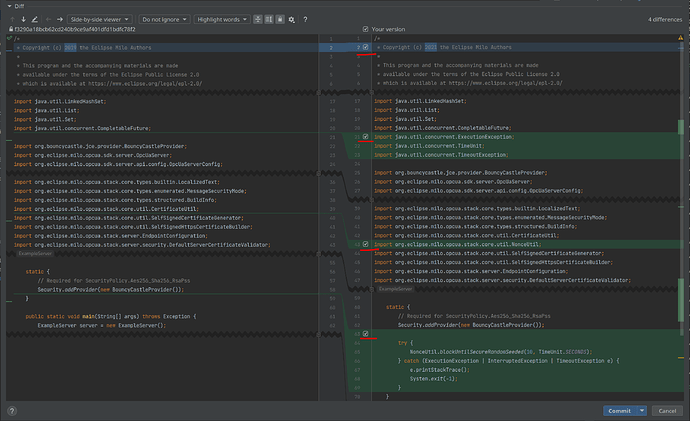 but it does handle partial commits well enough for my needs:

Hmmm. That looks pretty good. Just set the checkbox for each hunk?

(As noted elsewhere, my adoption of IntelliJ is rather recent…)

Yep, just set the checkbox. I try my best not to ever need this, but it happens sometimes…

but it happens sometimes…

Oh, yes. The “quick fix” that one forgets to check in, polluting the following work. ):