I've been stuck on a task for some time and can't seem to find any raised topics on this - if I've just missed them, I'm really sorry.
I want to log how long a machine is not operated during change-overs and we currently don't have any specific signals for the start and end of this process, so my solution is to measure the time between OEE drop below 20% and then jump back over 20%. I've created a transaction group and made an hour meter for this, but the problem is with logging it - I've set the table action to insert a row, but it keeps addidng every second. How could I log the settled value only?

When, and where, do you want to log it ?

I want to log every time the counter stops and only then, for ex.: currently the machine has been stopped for 15453 seconds due to a cleaning procedure, currently it gives 15 thousand lines on every second, while I want only the 15k value logged - just to get how long the machine was down and at what time. Where - in a DB or another tag, I'm not sure - my end goal is to present the values on a table, to showcase how long changeovers take.

Otherwise, I'd create a boolean tag, let's call it notOperated that monitors your OEE and becomes True if OEE is under 20, something like this:

Then you can use this as a trigger, and its timestamp to calculate how long it stayed True.

That is almost precisely what I have done - I have created a tag, that is true when an alarm on OEE is active, I then created a transaction group to have an hour meter: 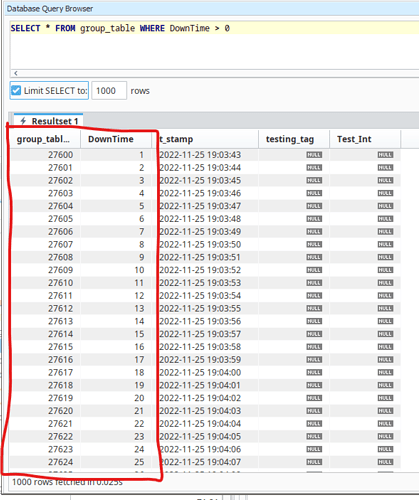 Use a tag change script (I'd go for a gateway event, but a script directly on the tag would also work). You may or may not need a secondary tag to store timestamps, as I don't remember if the previousTimestamp is available in tag change scripts.

The problem is likely how you have the Transaction group configured.

What are you using as the trigger? 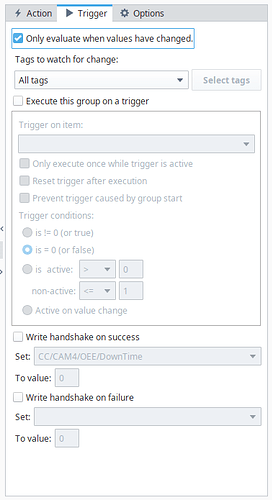 You should set you transaction group up so that this tag is the Trigger.

Add it to the group as an Item if you haven't already, set the option to execute this group on a trigger, and then set the Trigger on Item to the item that is bound to this tag.

You could also use the actual value as the trigger, but I find it is clearer to use a boolean tag as a trigger, especially since you already have one.

This should make it so that the transaction is only triggered when your trigger tag changes, then you can use SQL to calculate the difference between when the records were stored.

Right now the transaction is triggered when ever any tag in the group changes, resulting in a record for every second.

Thank you for your detailed answer. However the part I am struggling with is precisely the one you skipped over

I am struggling with differentiating the values from SQL, as the transaction group stores the hour meter every second that it is active, and I only need the value when it becomes false again.

Only execute once while trigger is active

Oh, sorry, my bad for reading that wrong.
I tried making the trigger and I do manage to get a singular value, and I'm really sorry for bothering you guys so much, but I with the trigger I am stuck on the fact, that if I create the trigger to be activated when the value is true, it writes a singular first second, not the last, and if I make it write when the tag becomes false, it only writes zero (tried battling this with making the seconds retentive, bet then the trigger doesn't go off, because the value isn't zero)

I recommend you not use the hour meter. It is meant for use with repeated recordings.
Instead, use an "Any Change" trigger and just log the current value. You can extract the durations from the timestamps using SQL LEAD() or LAG(). Some examples:

I usually do all of this in the database with lead() and/or lag() window functions. Say you have multiple of these recording to a single table, using an id column to segregate them. You record every change, and due to tag restarts or script restarts you get some duplicate rows as you’ve shown. The query to pick out all of the completed cycles that overlap a time period would be something like this: Select id, t_stamp, finish_ts, finish_ts - t_stamp As duration From ( Select id, t_st…

Would another option be to use the transaction group - Standard Group rather than the Historical Group.

I've done this when recording batch data to our database. It has the option to either update an existing database entry or create a new entry. In this case you would need another tag to differentiate one downtime event from the next.

Another option would be to think about logging in a different way. I capture downtime events by having a tag setup to monitor or calculate the status for a piece of equipment. When the downtimeEventActive tag turns on indicating a downtime event started the tag script copies the current time to a eventStartTime tag. When the tag turns off it copies the current time to a eventEndTime tag then subtracts the eventStartTime from the eventEndTime to get a total duration of the event. Finally, the script adds one to a transaction trigger that is setup to trigger a Transaction Group to store the desired tags to a database. 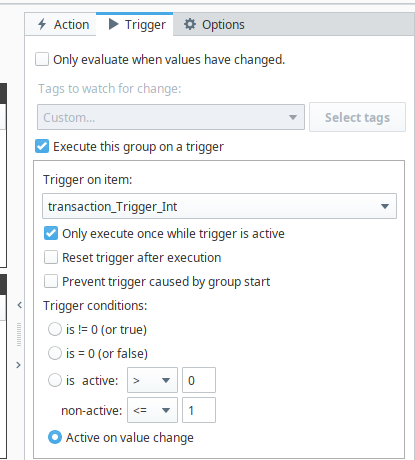 Is it okay, instead of using transaction group, if we enable the 'Tag history' on that tag whose downtime/uptime is to be monitored and then use SQL query to get the duration?

Querying tag history with your own SQL is very complicated. The tag historian's bindings and scriptable query tools do not have the equivalent of LEAD() and LAG(). A dedicated table for events, using either the SQL Bridge module (transaction groups) or scripted inserts, will be much easier to work with.

Okay I have done the same, enabled tag history on a tag named 'OnState_Button' and then use a script on this tag (on value change) picture below.

Issue is, the system.tag.writeBlocking is not storing duration output value into the other tag.

When seeking help about something that doesn't work, it's usually a good idea to make it clear what behavior you're observing. Like, error messages, etc.

But don't use spaces in tags names. As a general rule, if it's not a valid python variable name, it's not a good idea to use it for a tag name.

Don't run the query in the tag event script. Run it in a timer event with dedicated thread, to update your duration tag steadily even when the state tags aren't changing.