Make the case for Ignition

As an Integrator I’ve been excited to find out about Ignition. Now I have the daunting task of not only convincing customers but of convincing co-workers that this is a solid product. We have yet to integrate it, I’ve only been able to play with the fully functional demo.

Help me convince the stubborn. I’m tired of hearing things like this

-Java is terrible, not stable at all.
-Its web-based, browsers have memory leaks. No way can it run 24/7
-Java is slow, I bet the pages are unresponsive and not ‘realtime’
-Its too cheap to be good

Stability is the biggest issue that people seem to fear with this being in Java. However they seem to forget all those high-priced SCADA packs that exploded because of a .dll change windows made with some update.

-Java is terrible, not stable at all.

This is just completely unfounded. Not sure how to respond to that.

-Its web-based, browsers have memory leaks. No way can it run 24/7

The gateway/configuration is web-based, but the clients and designer aren’t, so this isn’t relevant.

-Java is slow, I bet the pages are unresponsive and not ‘realtime’

See above. The clients and designer are native applications; they aren’t slow and aren’t run in the browser.

Many people are confused by the ‘web-launched’ terminology. All it means is that our native client/designer apps can be launched from a central webpage (the Ignition gateway), and don’t need to be installed at every workstation manually.

-Its too cheap to be good

Not sure what to tell you about that

Other people are welcome to step in with their experiences.

Kevin gave you most of the basics, I just thought I’d share a few thoughts.

Also, for what it’s worth… do they criticize .Net applications the same way? Probably not… but the reality is that the two technologies act and perform very similarly.

Ultimately it’s really too bad that people need to pay more to feel good, otherwise who knows, we might still be selling it for the original price of $895*

There are a variety of other things I could mention, but I’m sure other actual users will chime in with their own thoughts. It’s not all roses, and I would be happy to discuss the negative aspects of java, but there’s really no way that they are any worse than the negatives that come with any other platform.

I’ve never really dealt too much with java before ignition so I wasn’t sure what I was getting in to when I decided to go with ignition for our plant monitoring system but I have to say that it’s probably the MOST stable piece of software I’ve ever used. I’m sure a lot of it has to do with the hardware used as well (we’re using virtual servers and I’m not 100% sure of the specs) but I’ve had it up for over a year now and except for planned outages due to upgrades I’ve NEVER had a gateway crash on me.

I’m almost starting to regret having a redundant system because the primary server is so stable I’ve never needed to rely on the backup.

I’ve also had multiple designers and multiple clients open on my desktop at the same time and never had any problems with it. My desktop is nothing special, Dell Optiplex running windows XP and 2 gigs of ram.

As far as the cost, I have to say that I too was skeptical at the start. However, inductive automation practices what they preach and it’s easily the best value out there. Not to mention the support is top notch (I really have only relied on the forums but the few times I did have to call in my issue was resolved very quickly).

Trust me when I say it will really set you free to be as creative as you can be. I love when people come to me and ask for something to be displayed on our system and in an hour or so it’s there. I don’t have to worry about conserving tags or worrying about how many people are viewing the system at one time, it’s just gives you such a piece of mind knowing that you don’t have to worry about it when you’re developing.

I honestly don’t know why anyone would choose NOT to go with Ignition. Just my 2 cents

Real-world application. Granted, this was from the FSQL days, but Ignition has made things even better!

We have a customer requirement for a traceability on the door modules we produce. The powers the be decreed that we would use a system by Rockwell Automation, as they were our “preferred solution provider”, rather than FSQL. So we spent approximately $65,000 on software and another approximately $40,000 in engineering costs to try to integrate an OMRON platform into their stuff (I censored myself a bit, there), and then spend another two years trying to keep it all running with weekly (sometimes daily, sometimes hourly) problems-- not to mention family issues by the 2am calls. All for trying to keep seven bits of software to play nicely with each other.

Then, after calling me to fix it while I was on vacation (y’all know I’m, like, 800 miles away, right?), I convinced them to streamline the system (meaning yank out all the Rockwell stuff and put in FSQL). two years and absolutely no issues and under $10,000. Here’s a couple of pics to illustrate the flow. 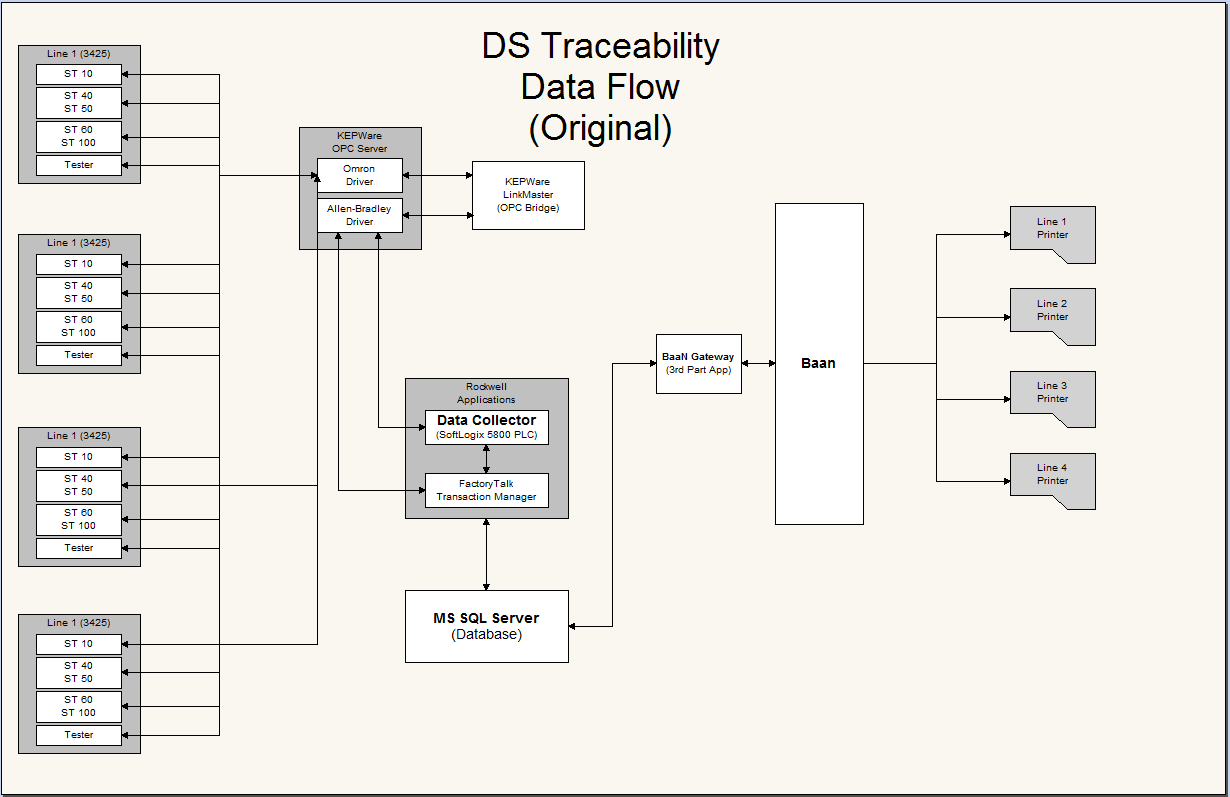 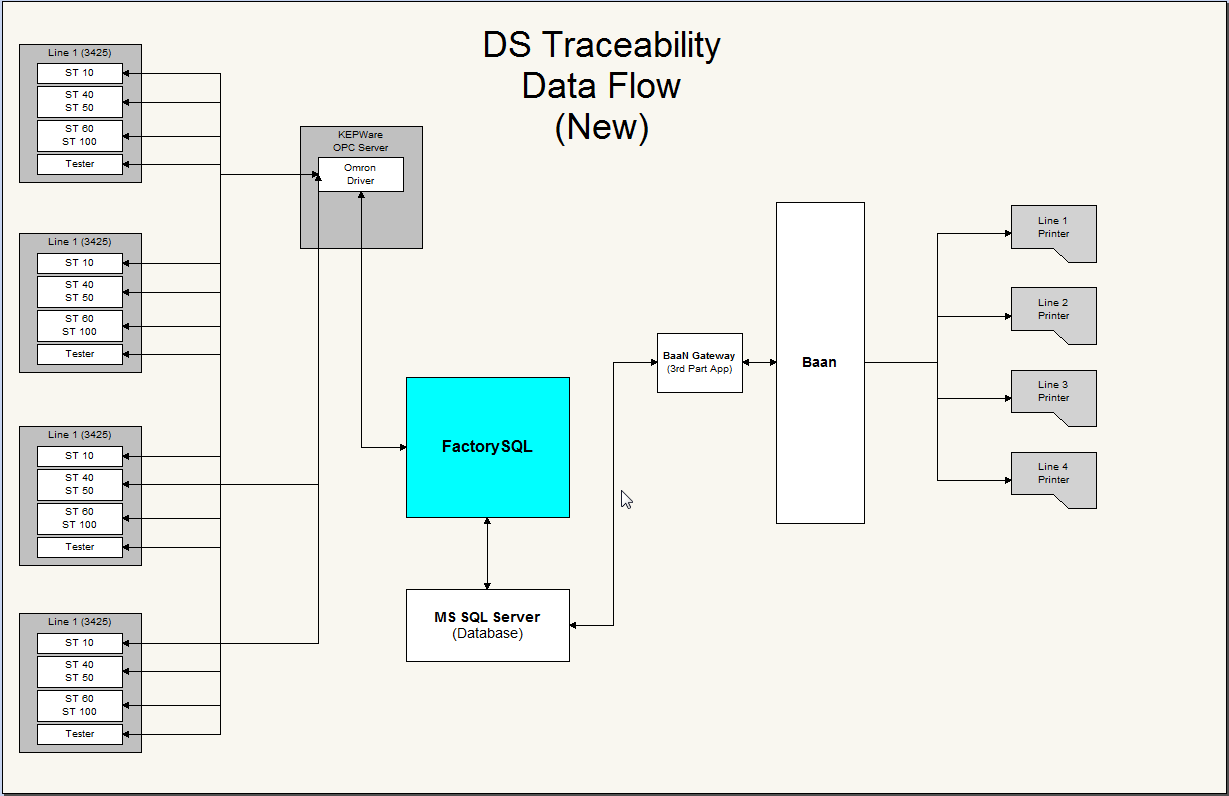 You may face significantly different scenarios between convincing co-workers of change (they don’t want to learn a new technology) versus educating them about Java (not Ignition specific).

Java has changed and improved significantly from the late 90s, where it’s reputation remains with some people. When associated with web browsers, they are probably thinking about “JavaScript”, which is interpreted in a browser, but really has nothing to do with Java. Java applications run locally on your machine. “Web launching” is more about managing the program/project version centrally to make installation/patching/updating easy. Java applications are “fast” and can be quite stable. Program stability will be most significantly affected by the quality of the product, rather than the language it was written in. I’ve used some clunky old Java programs, just like I’ve used clunky C++ programs. I think Ignition is streamlined and rock solid

If your discussion shifts toward the option of change, I would recommend setting up your co-workers with a web demo for an introduction to Ignition. We’re at a mature point with the software where there are lots of customers all over the globe running Ignition on mission critical applications. There is plenty of case study material, references available, etc. Contact your sales rep for this info.

In terms of price advantage - I would say that we had a lot of advantages creating the software in 2003, which was a good time to enter the market. We also happened to start with young programmers, some with IT experience in college, and several who had never been tainted by industrial software. We were backed by experienced integrators who were not totally satisfied with existing options and understood the status quo. This blend provided the opportunity to learn from what was already available, but allowed us to leverage existing technologies and an architecture that makes sense. We didn’t have to be bogged down with a large legacy support base. Since then, we’ve remained lean and focus on a unified platform, not re-inventing the wheel, and sticking to our core competencies.

In any case, end users and Integrators alike usually get pretty excited when they realize what Ignition can do.

[quote=“mdonaldson”]As an Integrator I’ve been excited to find out about Ignition. Now I have the daunting task of not only convincing customers but of convincing co-workers that this is a solid product. We have yet to integrate it, I’ve only been able to play with the fully functional demo.

Help me convince the stubborn. I’m tired of hearing things like this

-Java is terrible, not stable at all.
-Its web-based, browsers have memory leaks. No way can it run 24/7
-Java is slow, I bet the pages are unresponsive and not ‘realtime’
-Its too cheap to be good

Stability is the biggest issue that people seem to fear with this being in Java. However they seem to forget all those high-priced SCADA packs that exploded because of a .dll change windows made with some update.

Thank you developers and integrators for sharing your insight and experience. I’ve wanted to back Java but I just don’t know enough about it, so the developers insight is very useful.

Kevin - Its amazing how much of this industry goes off dis-information. So when a client is ‘web-launched’ really what is going on is the client is downloaded via the web-browser. In the end its still compiled code and just another process like the 46 running on my computer right now.

Colby - When it comes to .NET the only people I’ve heard criticise that are the couple of software developers we have here that write some apps =). Also when it comes to price I think you are right about the inflated infrastructure. I swear some, not to be named, products spend 90% of their software development on the licensing of their product.

Duffanator - I agree with you about the ‘set you free’. Nothing is more frustrating than telling the customers those 2 new tags he wanted is going to cost x amount of dollars since he will be going over the tag count by 1. I admire Ignitions pricing model, it just makes sense and to any potential customer I know it will make sense when they see it compared to other products.

Jordan - Thanks for the real-world application. This is good ammunition. I can only convince people so much when I have a demo running for 10 minutes with 50 tags in it.

Nathan - You are right, I will setup a Web-demo and let technical sales work their magic. I’m a young engineer and I get tired of the status quo or doing things a certain way simply because that is the way we do it, with no real logic or reasoning behind it.

Thank you all for the replies. I think it would be great to have a ‘skeptics section’ on the web-site that lays down all the ‘rumors’/false claims that get voiced.

For me. I just new in Ignition world. I went to sacramento last july for training. My advise go to inductiveautomation on youtube and see the power of ignition.
My application is 200 Project in one gatway. Webcloud Scada of 200 client for WTTP using 3g,gprs with Kepware opc.
Imagine i have a lot of web client access on same time more than 70. Unlimited Tags . Unlimited Client .based on database .
Thanks
Tamer