Here’s a sample of stuff on my network. The first two will eventually evolve into our Redundant Mission Critical system (yeah, I know the versions don’t match. It’s why I said eventually). The others are OPC Servers sitting on PCs that I also use for routers. 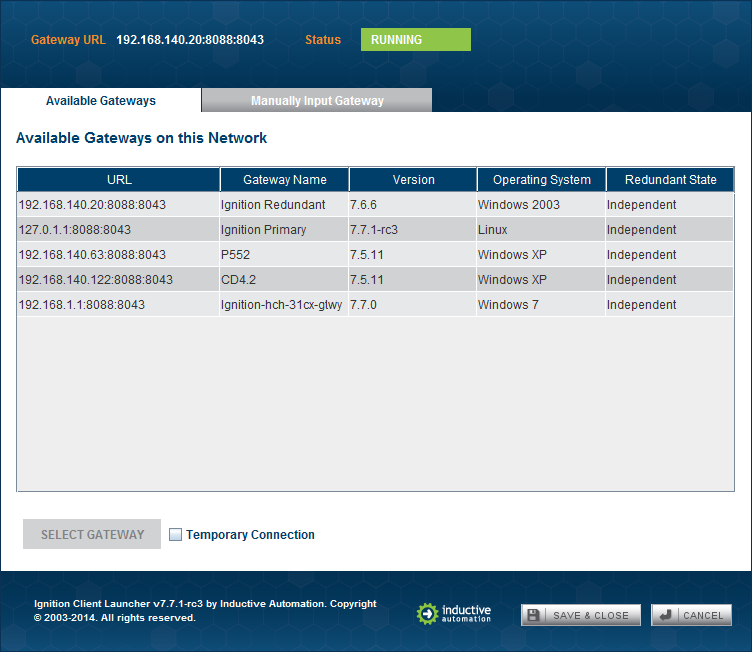 Ideally, all of them should be showing on the 192.168.140.x network. But, as you can see, a couple of them are not (one’s on localhost and another showing the other NIC). To get around the connection issue, I have to manually enter the information.

I like the idea of the Available gateways tab, and I like that you can still manually enter one. But I think it would be nice to have an editable table of all gateways.

Actually, what I’m envisioning is a table on the top that can be populated with all your gateway bookmarks. A separate ‘scan’ function can look for active gateways that you can then pick and choose to bookmark into the main table.

EDIT: I was able to fix what was causing the issue on the Windows PCs, and still have to see what I can do for the Linux install. But I still think it’s a good idea.

This has come up a few times. What we can do is add a separate tab on the client launcher that allows you to add Gateways as quick launch shortcuts. I’ll add it to my TODO list.