Message Handler in Perspective View Executed Twice on One Call

During testing today we saw some odd behavior that I hope someone can help me identify a cause.
In this case, a view button component script calls a Project Library script. The Library script does validation of parts and runs, and if determined appropriate, the part is added to the current run by means of calling a message hander in the view. The message handler calls a function to add the part information to a DB table that contains the parts in association with the run id (as a FK to the runs table).
What we saw this morning was about a dozen parts, when submitted by the tester, were added twice to the DB table. Some parts did NOT do this, about a half dozen. There were about 3 that added normally before the duplicates started, and then 2 more after the duplicates ended.
Each of the duplicate pairs were added at the exact same time, or within a few milliseconds (e.g. both entries for part A were added to the table at 09:33:35.322).

Looking at the logs, the process looks like it was flowing normally until the message handler in the view was called. At this point every log entry was duplicated. 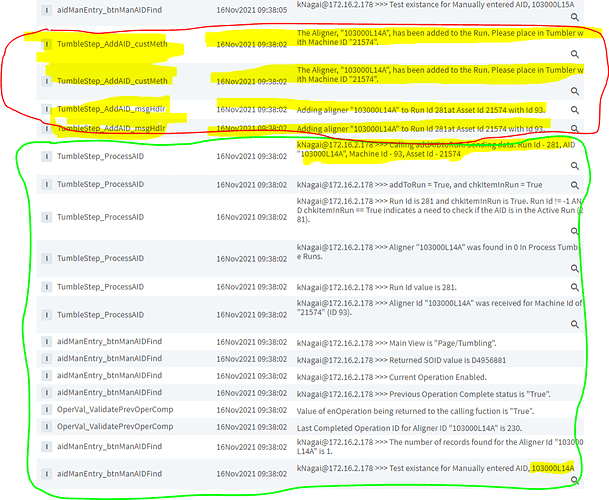 image1003×823 138 KB
In the imager above the green boxed area shows log entries that occur once each, and are accurate for the scripts that logged them. The log entries in the red boxed area are the logs generated by message handler and a custom method the message handler calls. Note that these are duplicated and have timestamps that match. The last entry in the green box is logged immediately prior to the script executing the sendMessage function that calls the message handler.
That code looks like this:

The message handler script is as follows:

So the message handler seems to be executing twice in the case of these duplicate entries, resulting in the duplicate log entries and the duplicate items added to the DB table.

I searched through the project to find all places where the message handler is called and there are only 3. Each place that calls this message hander is “mutually exclusive”, meaning that due to the flow of the scripts and what scripts are called, only one of these message handler calls is ever executed.

Where is this being called? A submit button press?

Each place that calls this message hander is “mutually exclusive”, meaning that due to the flow of the scripts and what scripts are called, only one of these message handler calls is ever executed.

Given your multiple entries you may want to revisit those areas and make sure that is the case as it would explain this.

Related to the problem of duplicate rows - what would you say the natural/semantic key of your database table is? From your post, it sounds like you should only have a unique combination of (aligner_id, runId, machine_id) - you should make this, or whatever the unique combination of columns you want on the table, to be a UNIQUE database constraint on the table. Creating UNIQUE database constraints is really the only way to ever be sure you don’t get duplicate rows in a table, and generally speaking database constraints are the only reliable way to ensure structures of database tables, scripts are not enough, double button clicks happen unexpectedly , a tag change event might run twice when you expect it to run once, etc.

Thanks for the suggestions on the additional payload params and table constraints. I’ll add some additional parameters to get more info on the calling entity. I’ll confer with the IT folks about adding constraints to the tables. We’ll have to evaluate the exact configuration, but I’m thinking just the aligner_id and the runId will likely suffice, but I need to verify that and then get it implemented.

That said, it still concerns me that the msg hdlr would seemingly fire off twice when it was only called the one time. Since my original post, the tester has ran through this scenario dozens of more times and the duplication has NOT occurred again. We did have the server rebooted prior to this additional testing.

Just for clarity, there is a single message handler that can be called from one of three different places in the code. Here is a simple diagram of that process flow: 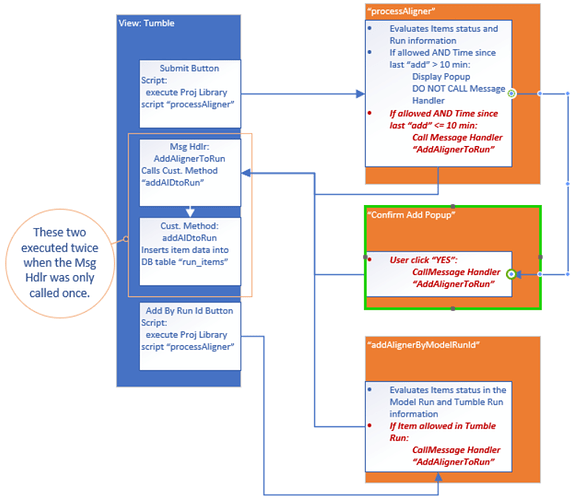 image777×678 116 KB
Two of these location are either in or are called from the processAligner script.

The third location is called from a completely different script, the addAlignerByModelRunId script
3. Each item in the Model Run is evaluated to see if it can be added, and if so, the message handler is called for that item