I am trying to make a comparison between 2 tags in an expression tag to show if my symbol is running, faulted, or stopped

what I am going for is

I tried using the example from the user manual but I kept having it so if both tags were true it was giving me the “Tag 2 is positive” result instead of the “both tags are positive result” , So I don’t get it because I assumed that spot is for 1st condition false 2nd condition true ,but its the result I get for both conditions being true?

You say your tags can be true, so are they booleans ?
If so, I’d suggest something like this:

if they’re not, as your code suggest, simply replace tag1 and tag2 with a boolean expression:

Technically, || isn’t an xor operator, but if you reach that point then the check for both are true has already been made, which means if a || b returns true then only one can be true.
The fallback then handles the both are false case.

one is a boolean and one is me checking if something is greater than 0 , would that still work?

Yes, just mix and match. Use the boolean value of the boolean tag directly, and use your comparison for the other one.

If it makes it clearer, you can think of it like this:

Except you don’t need to explicitly check for truth if your tag is already a boolean.

ill let you know if it works after it runs again

Well, I guess you could technically think about true as 1, but that’s not why I write it like this.
It’s about readability. It doesn’t make much sense with names like tag1 and tag2, but with real names (if you’re following a logical naming convention) it makes things clear and simple.
Let’s say your boolean tag is named something like engine_started, and your value tag is named gear.
To know if you can get your car moving by stepping on the pedal, this is quite clear:

Now, technically, you don’t HAVE to compare gear’s value to 0. If it’s 0, using it in a boolean expression will return false, because it’s 0. You could write

if gear is above 0, then it will be considered true. It will work. But I find gear > 0 brings more meaning to the code. It’s more explicit.

from the looks of it, it flickers a fault for a second during the transition

any idea how I would go about that?

maybe a delay before that or check , does expression have delays?

I’m not sure I understand the issue…
What flickers, and what is the transition you’re talking about ? Can I see the actual thing you’re using ?

so it will show faulted during that half a second

the if statement you have is working as intended , I just didn’t think of that tiny time in between

You should use binEnc to combine your two tags into a single binary encoded integer. Then use case and test for 0, 1, 2, 4. Using ifs for this is overly complicated

Can you show me how you’re using that expression ? It shouldn’t flicker or anything, there’s no reason any amount of time between activations would lead to a fault…

I don’t find 2 simple ifs to be more complicated than abinEnc and a case :X

but i wanted to check if for some reason the solenoid comes on by itself, or there is only an output, then i have a problem I can go investigate on the machine

the flicker only happens on the way back down, the output is at 5 , so once the solenoid shuts off it takes a second for the output to go back to 0 , which is the time i get the fault

I don’t see how that would cause a fault (which I understand as ‘makes the expression error out’).
Show us (like, a screenshot or a gif) how you’re using it.

This expression creates a status based on the 2 tags 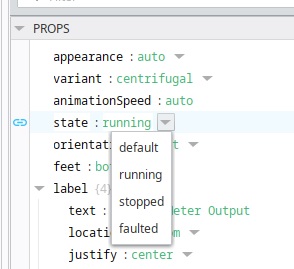 which is just bound to a pump symbol’s state in perspective , so i can visually see if running stopped or faulted

the output value goes between -.03 and 5 whenever the solenoid comes on so I just used 0 as the check since its default value when its not on is below 0

the output is quick to go from -.03 above 0 because its next to it, but once its up at 5 , it takes time on the way back down

OOOh okay I get it, when you say you get a fault, you mean it’s the status faulted returned by the expression !
I thought you were getting an error while the value was coming back down to 0…

Well, I guess you could throw in timestamp checks on {SolenoidON}… but that gets messy real quick.

is there any way to delay in expressions? if it did the or check 2 seconds after the both check it wouldnt hurt anything

I don’t think it’s a good idea to add a delay to the evaluation itself. But I guess using an intermediate custom property on your pump symbol, and doing some timestamp comparisons to determine if the evaluation should be run, you could manage to effectively delay it…

I can’t do that now (I have my own job to attend to ;p) but if I find some time I’ll see if I can figure something out - though someone else might just come in and give you the answer in the meantime.