I was watching the "setting up Rendundancy" video. Now, how is he able to have 2 gateway tabs?

"Ignition redundancy supports a 2-node system, meaning there are two copies of the Gateway running. One node is the Master Gateway and the other is the Backup Gateway or backup node. All projects, Gateway settings, etc., are shared between nodes. The master node manages the configuration then replicates it to the backup node. "

This is from here:
https://docs.inductiveautomation.com/display/DOC81/Ignition+Redundancy

The reason the backup gateway looks the same is because it is an exact copy of the first one.

it is an exact copy of the first one.

Except for a handful of redundancy settings to keep the two distinct.

You should see a notation at the top of the gateway webpage if the role is not independent, e.g.:

I am aware that I need to set up one gateway as a master and one as a backup as shown in the video but when I set the Local gateway to master, even the other gateway goes to master without me setting it up(it does it automatically).
If I switch the other gateway to back up even the Local goes automatically to backup.
Any change in the redundancy status for some reason is replicated automatically in both of the gateways so I cannot set up a master and backup. Is there a solution to that ? 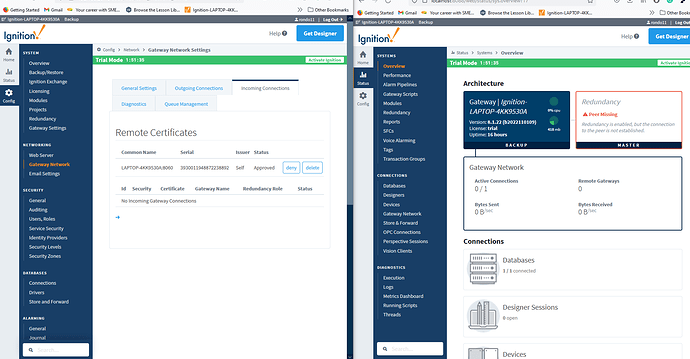 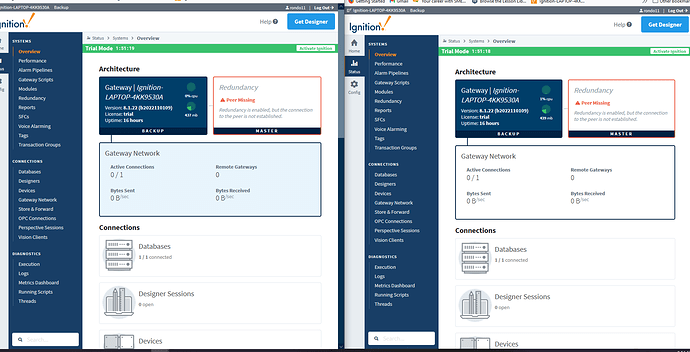 Could you provide a screenshot of the Environment card located on the Status > Overview webpage? This should show the detected NICs.

You aren't looking at two different gateways. You just have two browsers open looking at the same gateway.

alright, so I guess creating a gateway from the designer is not the way to go. So how do I create a different gateway ? cannot find it anywhere.

So how do I create a different gateway ?

Another gateway is another installation of Ignition. Virtual machines are great for this.

I assume you mean from the designer Launcher? If so, creating a connection to a gateway is not the same as "creating" a gateway. As @Kevin.Herron said, a gateway is "created" by installing ignition