I have two named queries set up in Ignition for MariaDB:

ava.sql.SQLException: Could not set parameter at position 1 (values was ‘description’) Query - conn:771(M) - "

Is the Named Query literally just that provided String, or is it something like

Quick online search would suggest removing the double quotes around ":col". If your Named Query is just a query which has no parameters configured/expected/received, then something else is going on.

Quick online search would suggest removing the double quotes around ":col" . If your Named Query is just a query which has no parameters configured/expected/received, then something else is going on.

JDBC (or other interfaces for any DB I know) does not permit parameterizing query structure, just values. Column names are structure. So ":col" would in the above would never be acceptable, with or without the double quotes. Parameterized values are not quoted, so ‘:val’ will not work either.

I might be misunderstanding the original question (and I definitely had the syntax wrong - yikes), but with Named Queries, you can specify a QueryString Type and provide a query like

where col is passed in as a String.

But if it was

then there would be an issue.

Huh. If you are going to allow structure substitutions, you really should allow the double-quoted form – that’s the SQL standard for identifier quoting. FWIW, it seems to defeat the whole purpose of Named Queries.

FWIW, it seems to defeat the whole purpose of Named Queries.

@Transistor: Could you post a screenshot of the NamedQuery from the Designer so that we can rule out formatting?

Thanks, all. I left this overnight and when I returned in the morning it worked! I’m running on a trial licence on a development machine. The query works from the Named Query test window whether the 2-hour trial has expired or not. This has me rather puzzled.

The test query in my original post is the literal SQL query. Screen grab below. 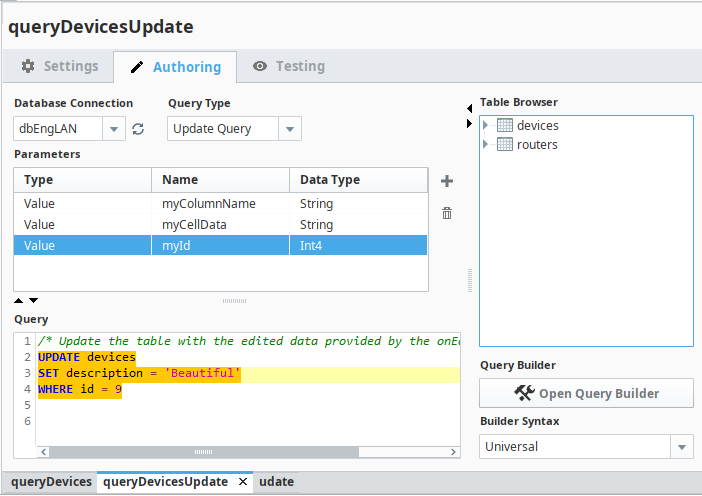 Now I’m wondering if I somehow upset the MariaDB / mySQL privileges while debugging this. I’ll do some more research and testing.