When I put a GW URL in the Native Client Launcher (Windows 10) it shows that the GW is running, however when I launch the project, it works fine until handing communication over to the client. Then it gives me:

If I put in the ports (nonsecure and secure) it works fine.

If it is able to see a GW why can’t it get the ports for me?
Is this fixed in some later version? Or does it depend on the launcher and the server versions matching or being beyond some point?

Oddly, I’ve always had to put in the port numbers. Which version are you running? 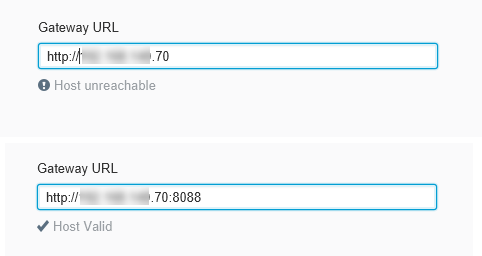 I do remember needing the port number in 7.9.9, which is where I was at before migrating to v8. Of course the launcher was updated in 7.9.10 along with the embedded java.

I’d be inclined to put this in the bug category.

The way I remember it for all launchers up to and through 7.9 if you were using SSL you had to specify both ports in the URL using syntax like hostname:8088:8043.

I don’t remember why exactly, but it’s not a bug and more if of an inconvenient reality.

Caleb was saying that the configurator of the launcher was saying it was a valid address with no ports entered. I seem to remember always having to put the port in, regardless if SSL was being used or not.

Yeah. It looks like a valid address with no port entered, and tries to launch a client, but only gets 95% before failing.

Would be nice to either accept no port or force a port from the start.

Does your gateway happen to have HTTP configured for port 80 or something?

Yeah, I’d bet on that being why.

Sorry, Kevin. I know it’s a little late, but do you think that you could have the documentation updated with this?

The way I remember it for all launchers up to and through 7.9 if you were using SSL you had to specify both ports in the URL using syntax like hostname:8088:8043 .

Thanks for bringing this to our attention!