Set up is going to be a windows 10 PC that has two monitors - one at eye level for users to use, and one as a TV elevated to some height strictly to show data.

What I am tasked with figuring out is how, on startup of the PC, to then open up the perspective app with the /generalView on the TV monitor and the /userView on the eye level monitor.

I thought about creating a shell script to put into my Startup folder that would open chrome, something like

but the fact I need to always open the tv url on the tv monitor and the user url on the user monitor is tripping me up. Anyone know how to do this?

Oh nice. I never had to use this before so I am glad this is already built in. I’ll test this tomorrow when I have access to multiple screens. Thanks

Ok I got this working where each monitor. I’m trying to write a batch script to put into the start up folder on my windows OS so that every time the computer is turned on/reset, the project automatically appears. I have

The config.json file I exported from the Perspective Workstation after I set it up how I wanted it - one different view per monitor. I did install Perspective Workstation only for my user not across the whole system so I don’t know if that’s causing my issue. I don’t see any errors appear. I’m testing it now directly by running the batch file, it shows my command, and nothing happens. I threw in a pause to see if any error pops up but I don’t see anything -

Also tried right clicking - Run as Administrator to no benefit

The typo was right I had made it initially and kept it lol.

I did try changing the json file name to startup.json now. New command is

Still nothing happens when I run the batch file.

is this an entire workstation config export or one for a specific saved app? that arg is meant to work with complete workstation exports from Workstation’s Settings: 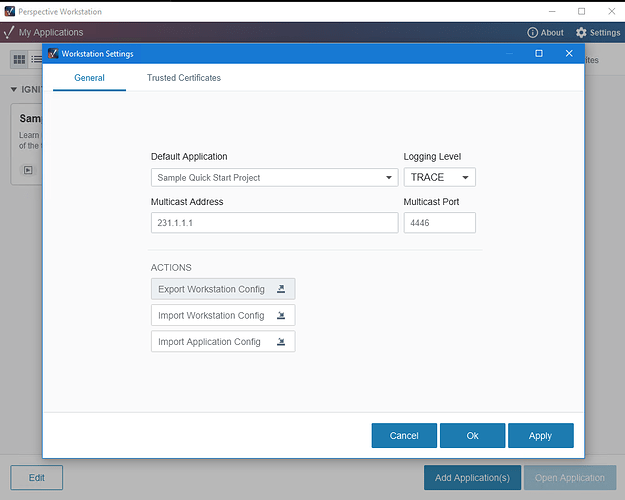 You can set the Default Application to start a delayed launch or combine the config.json with the application argument application=my_app

That was the problem - I was using a project export but not the full workstation export. I made it like that, added the application argument and it’s now working as intended. Thanks!