We are trying out Ignition to store and show alarms. Been adding a few production-lines so far and have around 2000 configured alarms. Mostly simple booleans imported from Kepware together with a description tag.

It works well, but when you select a long time span and the journal shows ~100.000 alarms the gateway maxes out in CPU use and does that till you close the journal. I have tried to make a new project and only adding an Alarm Journal with the same behavior. I would expect that it takes some time to load all entries but then the load should stop, shouldn’t it?

When I try to use Vision instead everything works as expected. It takes a minute or so to load but when it’s done the CPU goes back to idle.

Is this a known issue, and is there something I can do to fix it?

Thanks for your replay. I did add some indexes and it might have made the initial search a bit faster but the main problem still remains.

I opened the Alarm Journal and listed 24weeks back, around 170000 alarms. And then the CPU is stuck at ~100%. This time I left the journal open during breakfast and when I came back it’s still on ~100%. Closed the browser and still, the CPU continues in high load, even after half an hour. 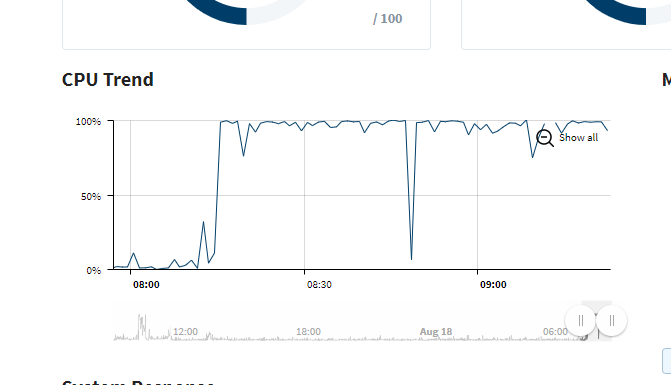 If I check the threads perspective-scheduler stays around 30%. And if I check my session total bytes sent says a whopping 2GB.

Viewing history with your own queries might be a solution as those seems to work fine. But I would still like to use the Journal as it’s a finished product, and works perfectly fine in Vision.