I thought it would be a good idea to utilize some of the CSS variables to set some of my background colors. I wanted my project to remain consistent with the selected theme.

8.0.13 introduces some major visual changes in Perspective. Theming has been overhauled and fully implemented. The result is a culmination of many months of intensive design, development, quality assurance, and collaboration. A sincere thank you to everyone who was involved in this project. In brief, here is what you need to know about the changes to theming in Perspective. For a more detailed introduction into what theming is meant to solve and the theory behind it, keep a lookout for an upcom…

For example, I’ve set a background colors in a menu tree to a variable value:
backgroundColor : var(--neutral-30)
which works great but the designer doesn’t like it 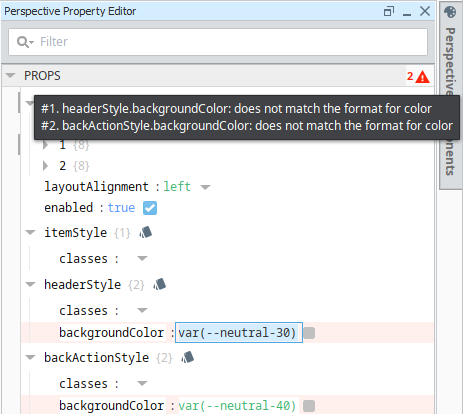 I think it would be great if the designer recognized the variables as a valid format.

You can also change the property name to background and the error will go away, however I do agree that you should be able to use that in backgroundColor!

What a genius idea! Its almost like you made the thing

Just tested it in the same nightly and it worked great, not sure where I also had the idea that var() was needed?

Even Better! Thank you

No worries. I can tell you that I’ve made the same mistake before as well.