Trying to have a number of cells in a perspective table be editable by the user and write back to the data property of the table. The data property is bound to a view custom property. My understanding from several other threads here is that it will not write back by default, a script must be triggered the onEditCell Commit event.

Get the following error:

Every time the error is because of the column name being a string instead of an integer. event[‘column’] is giving the “field” name under the column config. 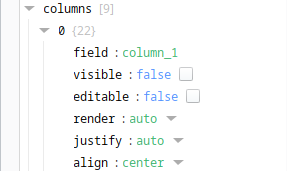 I’m almost certain I’m not understanding and abusing the datatypes as I’m passing data between tables and view properties, then to other tables. The field value of “column_1” is not something I chose, but how I was able to map the column config to the unnamed columns in the data property. Data property looks like: 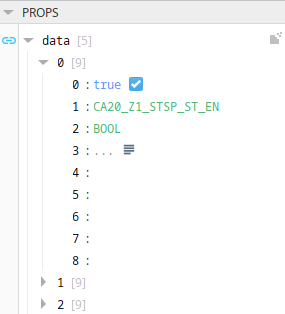 event is an object, not a dictionary. It should be:

Tried this and still getting the same error. Printing to system log, event.column still gives “column_5” for example.

Short version: My data property being a list of lists and how event.column is always returning a string name was the cause, I decided it would be much better practice to change how I was generating this data to instead be a dictionary with meaningful names. In addition to being more descriptive, I could now use the string event.value to update the cell solving the problem.

Longer version: I still think event.column should probably return an int column number when the data is a list of lists. I did a bit more experimentation…

Created this simple table to play with, mimicking my list of lists data property I generate in scripting. First notice the column_# headers, these were not created by me but automatically assigned. There is nothing configured under the columns property of the table. These identifiers must be what Ignition is using to track the columns - they are what you need to put in the field column if you create an object under columns property to configure the column. This string naming is also used for the selection.selectedColumn property of the table.

This is odd to me since someone setting up a table in this way wouldn’t have any context of that “column_#” naming, especially if they have headers hidden on the table. This brought me to the question of when will event.column ever return an integer if not in this case. The event script comments claim it can be in int. 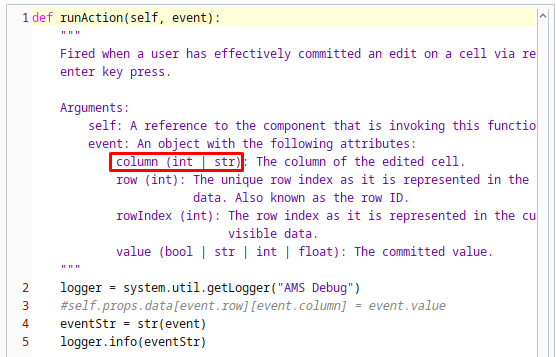 When data is an array of dictionaries it make perfect sense to return the key name since that is what would be used to work with the dictionary. I tried manually creating something in the data property that would return and int but couldn’t for any choice of Value, Object, or Array. Obviously values wouldn’t make sense as the data wouldn’t have a column dimension. I tried creating a new object under data and creating elements under it with integer names to see if that would return the numbers but it can’t be created that way.

Even creating an array of arrays (had to create an element in each array to display anything) still uses the “column_#” string:

So I’ll leave 2 questions, and all of this is just for better understanding of how perspective is working with these tables behind the scenes:

While the property editor prevents users from supplying integers as object keys, you could always do so via a script:

This still doesn’t quite answer your question, however, because even though the keys are now integers, the generated event still returns the columns as a string:
{"column":"0","row":0,"rowIndex":0,"value":"f"}

So I can’t think of any instance where an int would be returned as it seems we’re always casting the value as a string.