How much does a low power factor affect the efficient use of electricity? The power factor at my plant is low. I have seen values of 0.6 depending on what load is running at the time. The local power company doesn’t charge me a power factor penalty, but I’m wondering if power factor correction would be worth the investment.

If you aren’t getting charged charged for it, then that part of it is out of the equation. But, now we’re talking about efficiency.

(Apologies in advance for the didactic-- some may say pedantic-- stuff below.

Power factor is like beer. The Active Power (kW) is the liquid-- which of course is what you want. Reactive Power (KVAR) is the foam. Adding them together gives Apparent Power (kVA). 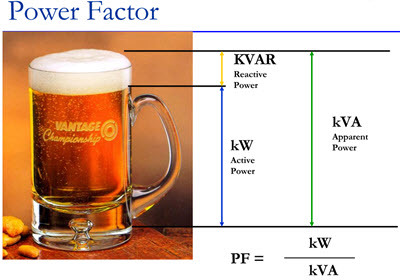 IMHO Power Factor correction won’t change how your existing equipment runs. But what it will do is “remove the foam”, meaning that less current is being used in the plant. It won’t affect your bill, since that’s still using Active Power, but it will help with capacity. You will use less kVA for the same kW usage.

[quote=“Henry”]The local power company doesn’t charge me a power factor penalty[/quote]You might want to look more closely at this. Small businesses with simple meters (three-phase versions of home meters) would certainly suffer, as those meters actually measure kVA-hours, not kilowatt-hours. So a low power factor would mean a large overcharge.
Large businesses are typically charged two separate fees: energy (kWh) and monthly peak (max kVA or kW sustained for some few number of minutes). If the peak is measured in kVA, you are getting charged.
Finally, consider resistive losses. The lines scattered around your facility make waste heat based on the current flowing through them, not the energy delivered. While a small percentage, it can be a big deal for infrastructure lifespans. The only real way to fix it is to apply power factor correction close to the problematic motors. It’s almost always induction motors, especially if they are oversized.